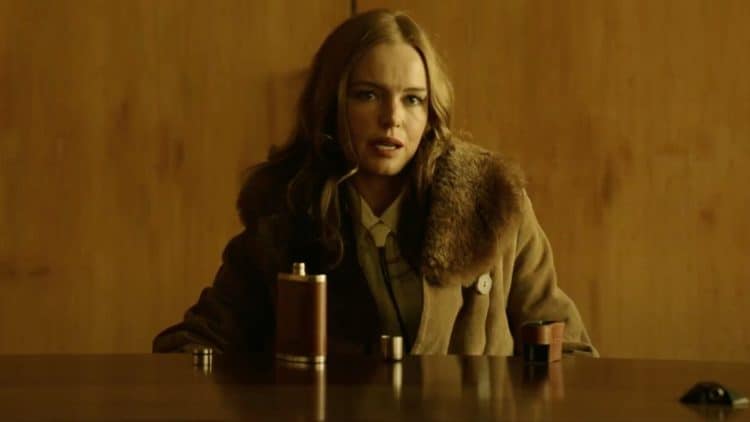 Sometimes the devil that’s known isn’t the worst devil that’s in the fight, especially since bringing out the devil in some people is the dumbest thing that anyone could possibly do, no matter if the resources the antagonist can call on are vast beyond belief. After all, it only takes one win to create a precedent. This movie definitely gives the feeling that it’s going to depict the antagonist as one of the worst possible offenders when it comes to the plight of the poor farmer whose land is being poisoned by the toxic runoff of a nearby oil field, all while going for the throat to speak when painting the oil company in the movie as the villain. If one couldn’t guess this movie is going to show that the oil company is the huge conglomerate that doesn’t really care about whose land they’re affecting, and are more than willing to do anything to avoid a hefty lawsuit that might actually expose them as a true danger to the environment.  This includes using Pablo Schreiber as the type of guy that’s paid to lean on the protagonist as hard as he can until the individual decides to give up the fight and simply allow things to happen. Such a role is a way to continue his tough-guy act that’s been ongoing for a while, but it definitely suits him.

The movie is bound to benefit from a star-studded cast as David Strathairn, Haley Joel Osment, Kate Bosworth, Edward James Olmos, Martin Sheen, and Alfred Molina help round out the ranks as they all take their place in this dramatic rendering that is said to be a version of real-life events. If one looks up Southern California Water Contamination Wars they might find that it’s easier to understand than they originally believed, especially since the reality of this is something that one can’t get away from that easily. But putting the matter into a movie that ends up puffing up and pounding its chest about as much as a drunken frat brother that’s been challenged to a game of beer pong has already proven to be a useful and entertaining method that has worked for some people. It probably won’t work for everyone as a person can easily imagine eyes being rolled at the mere idea of the oil company being seen as the villain since the whole idea that the country needs fossil fuels to run, which it does to be certain, kind of muddies the main point that big oil might be necessary, but ruining the livelihood of farmers rather than doing what can be done to stem and even possibly reverse the damage might be a better idea than trying to keep them silent.

It’s very easy to see Strathairn and Sheen as the heroes in this matter since they’re seeking to make things right and gain recompense for the damage that’s been done, but if matters were this cut and dried then it’s a hope that they would be settled quickly and without any further need to escalate things. That’s not typically how life among humanity works, however, at least not all the time. There’s always bound to be someone who wants to come out better than the next person, and someone that’s willing to keep the fight going if only because to quit is to admit that they’re beaten. The sad part of this is that once that fight starts, and it’s established that all participants are bound to see it through to the end, it becomes difficult to tell just which devil is going to show out the most and which one will do the most damage. That might sound awkward, but the reality is that every human being has a good and a bad side, and conflicts such as this can bring out either one. The downside of that realization comes when one unleashes their more devilish side in an effort to prove that they are the nastiest individual in the fight and ends up becoming the villain when they thought they were the hero. In speaking of this movie it appears to be that Strathairn, Olmos, and Sheen are bound to be the most heroic of the bunch, but at the same time, it’s tough to simply vilify big oil in such a manner without having to look at the gains versus the costs.

It’s pretty obvious to anyone that any business practice that damages the environment and the livelihood of another human being needs to change in a hurry, but as Sheen points out in the trailer, if the profit of doing something is greater than what it will cost after being caught, then many businesses will continue to operate in the same manner. Sadly, this is a little too true in real life.