Home
Movies
Why We’ll Be Watching The Movie “Thunder Force” 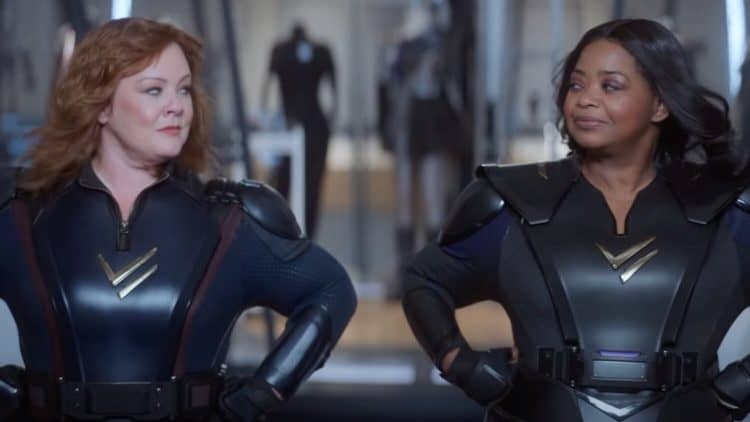 Superhero movies are still around so…why not give Thunder Force a try? Melissa McCarthy and Octavia Spencer manage to get together in this Netflix production as two old friends that appear to reconnect only for McCarthy to somehow stumble around Spencer’s lab and inject herself with a new serum that grants her super strength and apparently increased durability as well, while Spencer has already rendered herself superhuman by being able to turn invisible. They’re definitely not the typical heroes, but that appears to be what some shows and movies are going for these days since heroes are coming in a lot of different forms and it’s not limited to those that are young, experienced, or even all that skilled when it comes to being a superhero as is shown in the trailer, since being shocked at what a stun gun can do to a person to the point of electrocuting the intended target isn’t something one might expect from a hero. But giving Spencer the benefit of doubt her character appears to be a fairly mild-mannered scientist that probably doesn’t start out simply taking people left and right for the fun of it. But as great as the heroes can be, this usually means their opposing force, the villains, are going to be just as tough if not even more so. Heroes and villains tend to balance each other out most times, which means that super strength and invisibility are going to be given a match that they might not be ready to handle.

One thing about this kind of show that anyone can count on is the idea that the villains might be bad and they might be powerful, but the heroes are no doubt going to dig down and…hopefully find backup since super strength and invisibility are pretty cool and all, but the only other way to think that the villains will go down in this movie is if they’re simply too arrogant and are bound to act like Power Rangers villains in that they move around a lot and don’t have as much substance to them as they might need. Being realistic, McCarthy and Spencer with superpowers are pretty cool and all, but the villains they’re going up against are going have to be borderline silly caricatures or simply designed to lose in one way or another since otherwise, it’s too likely that the two women are going to need other heroes to pop out of the woodwork to help them. It does feel as though this might be likely since there’s always the chance that there’s more serum that could make a person into a hero just kicking around.

This is definitely going to be a comedy since while both women have flexed their dramatic muscles in the past and done quite well, this is the type of movie that already looks like it’s going to survive on one-liners and witticisms that are designed to keep people interested and possibly get them to laugh. Adding a little more realism to the idea it’s easy to say that this might be one of the Netflix original movies that will be enjoyed initially but otherwise given a shrug and a ‘meh’ once it’s all over and done with. It doesn’t look bad, but it does appear that there might be a lot more to it than the movie really needs, which is to say that it’s going to need to rely on more than just the fact that there’s a serum that can make people into heroes or villains. Like it or not, this has been done too, as many things that are still popping up as new movies have been done, but some of them appear in such a way that it’s hard not to point the many times they’ve been done in the past and compare them. The serum trope is one that has been around for decades and has been one of the most tried and true methods of granting someone superpowers, but the science behind it usually needs to be left behind since giving it an explanation would mean delving into matters that would be a little too lengthy and possibly go into details that would slow this movie way down.

Instead, it’s better to simply assume that this is going to be about two old friends who develop superpowers and have to not only adjust to them but also have to take on superpowered villains as well. It’s bound to work in a way that will hopefully provide a few laughs and an overall experience that will be different enough from the rest of the hero movies that people will admit that it’s nice to see the individual that’s NOT decked out in muscles or seen as a sex symbol finally getting the attention.