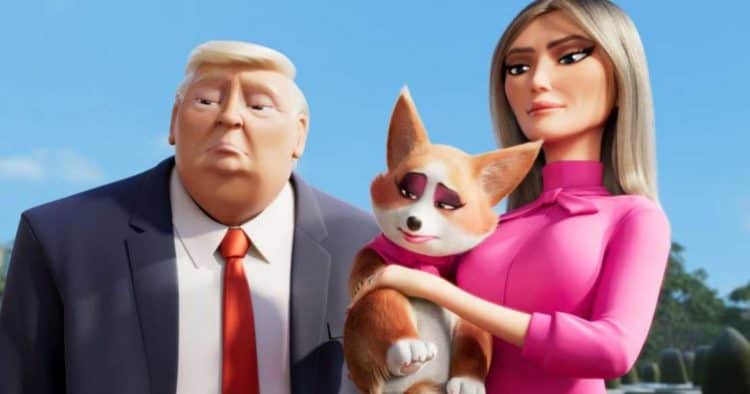 In a world where it’s being deemed okay to be offended by every little thing, The Queen’s Corgi is possibly one of the more risque animated movies to come out since it’s not really pulling any punches but it’s also making fun of the same couple that everyone on the left seems to enjoy mocking and ridiculing time and again. Kevin Burwick from MovieWeb explains just how the animated movie has been upsetting critics with its supposed normalizing of sexual assault by making a big joke out of it, which might make some people roll their eyes and others simply fume with rage. The one thing that’s amusing about this however is that upon looking back at the cartoons we used to watch as kids, meaning just about all of us when you really think about it, some of the things we didn’t fully understand back then would be seen as highly sexist, misogynist, and in some ways racist by a number of people today. And yet, those cartoons are still funny, they’re still entertaining, and whether you do or don’t like Trump, this one is too.

As Hannah-Shaw Williams from ScreenRant has taken the time to note the one scene in this movie with Donald and Melania Trump is what’s dragging the movie down, though there are other scenes apparently that are a little risque for a children’s movie. But truly, this one scene that is essential to Rex being kicked out of the palace isn’t even the whole movie, and yet it’s being used to vilify the film much as one reference, one person, and one set of ideas is being used to vilify an entire group of people that might actually agree that this movie could be pretty funny. It’d be even better if Trump supporters happen to think this movie is amusing since it would seem to, as the English would say “take the piss” right out of the many critics that have been hounding the movie since it was announced.

Yeah, the scene with Trump is perhaps a bit tasteless and not really necessary in its entirety since ‘Grab some puppy’ is obviously a play on Trump’s infamous line that’s been held up by the left as a means of claiming that he’s a rotten human being and doesn’t deserve to be president. But in that sense the movie is kind of like an apple with a brown spot, you can either enjoy the rest of the apple without eating the worst part or you can just ignore it and move on. The fact that critics are taking the time and energy to bash a movie because of something they don’t agree with means they’re doing their job, but the idea of stating that it’s no good at all for making a joke is getting a little ridiculous. At this point one might think that some folks are forgetting the basis of humor, that being the fact that it comes from something rather negative and depressing at times and is used to deny the kind of power that such situations possess. Laughing at such things is often healthier than obsessing over them provided that it’s done in a way that doesn’t seek to harm or victimize anyone specifically. And this ONE SCENE doesn’t seem to target anyone, let alone allude to what some might call sexual assault or harassment.

Quite honestly this movie looks funny but it does seem geared more for adults than kids since some of the jokes go right over the heads of children as they simply don’t get them. But the animation and the story line seem to be rather risque to some folks that don’t appreciate the humor or the attempt at normalizing what they would call sexual harassment on a very disturbing scale. Those same people tend to be the ones making light of Trump and Melania quite often, so it’s rather confusing that more support for the foolishness that’s inherent in the movie hasn’t been given in a sarcastic manner. It is funny to see Trump being represented in such a manner since he’s made to seem boorish, rude, and way too forward with the Queen of England, but all the same it seems to represent a very cartoonish version of the POTUS that some people should be able to get behind. If there’s any criticism to make about the movie it’s that the idea of making a film about a Corgi that’s been put out of Buckingham Palace sounds like a different version of The Secret Life of Pets set in England.

Overall if you’re interested in seeing what all the hubbub is about you might want to check this movie out and see what people are yakking about so you can either rest easy knowing that you’ve seen it and can make up your own mind, or join in the laughter.