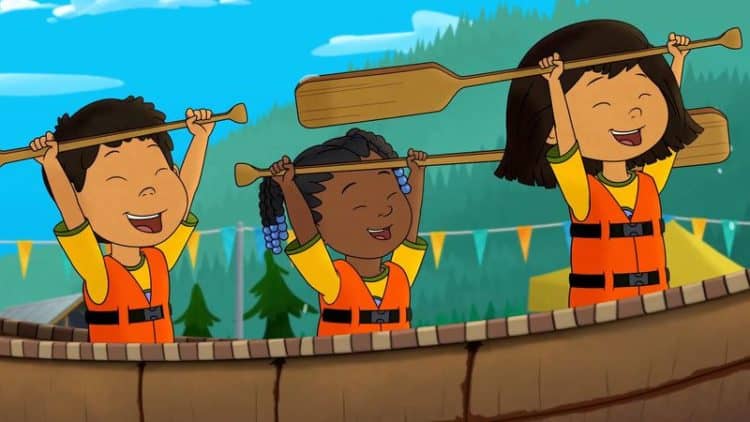 Ed Stockley of the Los Angeles Times is helping to drum up some publicity for a show called Molly of Denali that’s featured on PBS and while we can lift our arms for diversity, the question for originality continues. Don’t get me wrong, this looks like a perfectly fun and exciting show for kids since Molly and her buddies get to explore the state of Alaska, which is vast and filled with wonder enough to last for a while, but the idea of taking Molly on her own adventures after so many other kid shows have done the same seems to indicate that we’re still being fed a formula that’s been proven to work but also seems to be copied from the same basic mold. A kid, their friends, adventures, one or various locations, etc. While it’s bound to be a good deal of fun it’s also something that doesn’t seem to change on a fundamental level from one generation to the next. Those of us that are grown had these examples as children, and now our children are experiencing their own adventures through new characters like Molly. It is uplifting in a way that things have continued like this, but from a more cynical view it would appear that we don’t really care that the same idea is being given a new look with every new show.

One reason to watch this as Julia Jacobs of the New York Times would point out is that it does differ in a way by making use of a Native American lead as Denali is not a white or Hispanic girl and thus has a very different culture and background that kids might be interested to learn about. One might think that Dora was much the same way and they’d be right, but in the spirit of inclusion we’re starting to get more lead characters that are from different cultures. This is definitely a positive move forward since it does allow children to learn about different people and their lifestyles and how many are similar and in many ways different from their own. Those that might want to complain, and there are those out there, will no doubt moan and groan that of course we have to have a show where whites aren’t dominant. But this would be one of the dumbest and most ignorant opinions to have regardless that it’s likely to happen. Including various leads from different cultures is a positive swing when it comes to kids’ shows since the idea of having kids learn about different people and how they live is a serious bonus in this day and age. Teaching kids to think for themselves about one culture or another is a touchy subject sometimes and quite honestly putting the thought that one culture is just as good as another is very important.

Another great part about Molly of Denali is that it’s another kids’ show, pure and simple. It’s not going to be trying to indoctrinate kids into a different culture, but it will be showing them something different and it will be educating them along the way. The wonderful aspect of a kid’s show is that it seeks to teach young minds, not force them to think one way or another. That tends to come when we get a bit older and adults wish to guide us down paths that they think are appropriate or proper for our culture or societal standing. Shows like this tend to try and simply educate children in a variety of ways to keep things fun, engaging, and upbeat for the most part since honestly kids will learn that things aren’t so pure an innocent when they get older. There’s no need to remind them about the realities of the world at this point, especially since being a kid is one of the most important things to experience at that stage.

Kids’ shows are meant to be entertaining and fun to watch for the most part and engaging as well as educational, and any who think that this show might be anything else, like a call to exclude a certain group of people from being notice, need to take a serious chill pill and just settle back. There are still plenty of shows out there to pick from and for kids to watch, but Molly of Denali is one of them that seems to be based upon inclusion and the need to show a different culture as it seeks to educate children and make them more aware that there are in fact many different people in this world and we don’t all live in the same culture. With that on the table it seems fair to say that watching this show would be informative as well as a new experience that could be a positive moment in a kid’s life.