Home
TV News
Why You Should Be Watching Wu-Tang Clan: Of Mics and Men 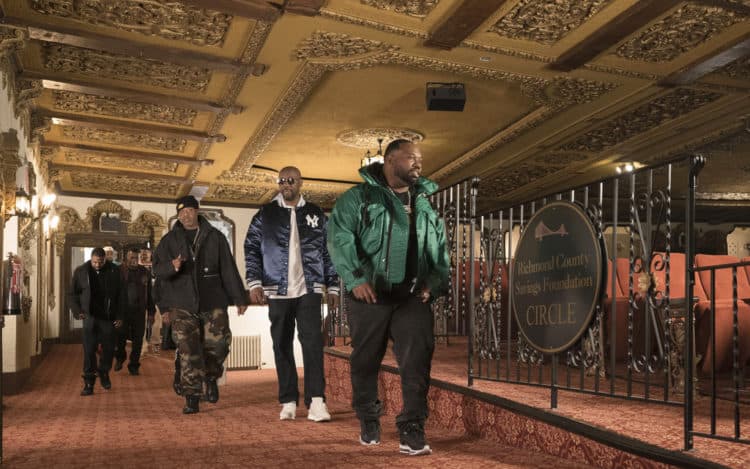 Fans of the Wu-Tang Clan are losing it over this show, with good reason. The in-depth look into some of the most influential and controversial music ever created is an experience that shouldn’t be skipped by anyone. If you don’t like their music, this goes double for you because you will almost certainly learn something surprising. The truth is, they made it for the fans, but the less you know about the Wu-Tang Clan, the more you need to see Of Mics and Men. With the announcement of the new EP inspired by the documentary, this is the perfect time to watch and listen again, or for the first time.

Before we talk about the show itself, let’s talk about why this story matters. Maybe you are sitting home in comfort, finishing dinner as you read this, and perhaps you’re one of the six out of seven people in the world who aren’t hungry right now. Or perhaps you’re the one of those seven who doesn’t have enough on your plate. We know that if you are reading this, you weren’t one of the over-half-a-million-people who died violent deaths in 2016 alone.

Also, depending on the color of your skin and your zip code, you may not have ever dealt with oppression. On the other hand, just under forty percent of Americans and millions or billions more worldwide can relate to this. Oppression, violence, and poverty are changing the world faster than ever before in history because of the sheer size of the global population. What does that have to do with some angry music? Everything.

To Succeed or Die Trying

Some people who read this, and watch this show will think it’s all a good bit of theater. For anyone who has ever lived in a poor neighborhood, which encompasses more of the world’s population than it doesn’t, these stories are like a Grimms Fairytale. There are born winners, lucky people, and then there are those who fight their way up from such adverse circumstances because they understand that the other choice is often death. Maybe not tomorrow, but too soon. At best, kids from the Staten Island Projects don’t make it very far most of the time.

Of Mics and Men is a four-part docuseries that shows the struggles, triumphs, and tragedies of the Kung-fu movie-loving rappers from the Wu-Tang Clan. When you come from a place of poverty, making your way up in the world is about as likely as winning the lottery or getting struck by lightning. It happens, but not often. These bold and intelligent young men knew they had the talent, but they fought every step of the way to reach success.

All along their path, there have always been naysayers. People have tried to take advantage of them, and ride their coattails. Trolls and haters try to tear them down, and even other rappers have tried to come between them. Even internal turmoil has never really been enough to stop the Wu-Tang Clan.

By 1993, the Wu-Tang Clan had managed to put out their debut album Enter Wu-Tang. Though they hadn’t yet reached the top of their game, they were on the way up. However, since they weren’t the ‘ideal,’ of what the industry wanted, the fight didn’t stop when they managed to bust through that glass ceiling and get recognized finally. They were still far from mainstream, and working their way toward a better life and better exposure.

While the first two episodes show the battle and the joy of reaching for the stars, by the third episode they show some of the flip sides. It wasn’t all wins. There were feuds and outright fights over the years. The documentary plays this aspect down a bit, preferring to show the brotherhood instead of focusing on the negative. While some might say that’s a significant omission, we think it’s playing to the more profound truth.

This group has always succeeded together and spent their time focused on the future and how to make things work. They know how dark the dark side can get. They grew up in a place where hopeless is a common condition. The story of the Wu-Tang Clan isn’t about what they lost. It’s about how they saved themselves and what they won with their perseverance and unity.

Lots of folks are lonely when they reach the top, but these guys never have to feel that way because they went all the way up together. Part of what makes them great is that they have more than talent. Wu-Tang Clan is also about their loyalty to one another. None of these men is a fair-weather friend. They have weathered criticism, death (https://heavy.com/entertainment/2019/05/wu-tang-clan-members-dead-still-alive/) and everything between together. Nothing as small as a fight can break that up so easily.

Most people have a bunch of acquaintances, a handful of friends they can sort-of count on if things don’t get too bad, and maybe one or two real besties who they know will be there come what may. Most people never fought their way up from nothing with their talented crew of brothers. The success and genius behind the Wu-Tang Clan isn’t any one thing. It’s not any single member, however successful their solo careers may be, that makes them what they are.

Without the whole story, it’s like just listening to the chorus of a song. Sure, it might give you a peek at the deeper meaning, but you’d be missing out on everything else that makes it worthwhile. Do you need to watch Wu-Tang Clan: Of Mics and Men? Yes. Without reservation, you should see this modern history docuseries. If you weren’t a fan before, you probably will be when you’re done, and if you loved Wu-Tang before you knew their story, you’ll respect them so much more for understanding how they got from where they started to your playlist.