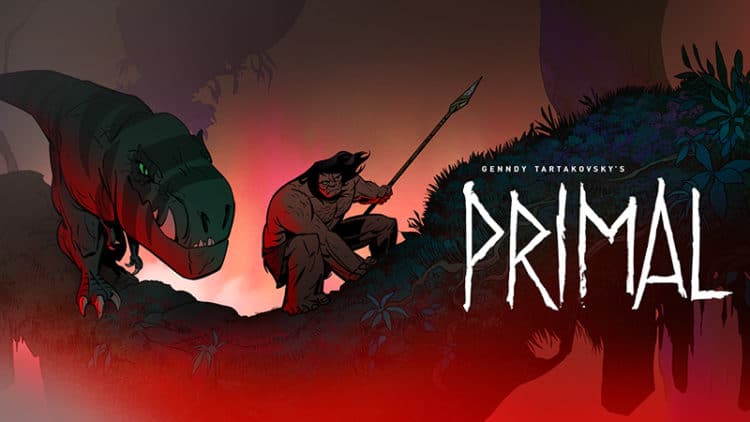 Now’s a good time to have HBO Max. Even with things slowly getting back to normal, people are loving streaming services. If you want one that has a selection longer than my arm, subscribe to HBO Max. I originally got it for Wonder Woman 1984 and I’m looking forward to the upcoming movies that will premiere. If you want something different, however, check out some of the television shows that are currently on there. I just so happened to come across a fairly recent animated series that premiered on Cartoon Network back in 2019. It contains ten episodes, the first five were released in October of 2019, and the last five premiered in October of last year.

Check out Genndy Tartakovsky’s Primal, a cartoon series that is anything but your average cartoon. After watching this series, I was certainly reminded why Cartoon Network has adult cartoons that play late at night. If you’re a bit late to this show (like me), HBO Max is your chance to fully catch up on it. I’m really digging this series and I’m excited for the second season. Use some of that extra quarantine time to make full use of those streaming services. I certainly am.

First of all, who is this series for? Well, if you have a strong stomach and don’t mind seeing things get dismembered, disemboweled, and eaten by monsters, you’ll probably like it. What I like about Primal is that it’s pretty much a fusion of fantasy, action, and the horror genres. When you combine genres like that, you know you’re in for a wild ride. And boy, what a ride this series is. I mean that figuratively and literally.

What’s Primal about? Well, it takes place all the way back in the caveman days, where primitive neanderthals have to fight tooth and nail for survival. The world of Primal is a prehistoric-like world filled with all kinds of dark fantasy creatures. If you’ve ever seen any kind of fantasy movie or played a fantasy game, you’ve seen these monsters before. Anything that’s big, has fangs, and eats people is in this show. However, keep in mind that this show has a prehistoric setting, so expect a lot of prehistoric-like creatures.

Now who are the heroes in this brutal world? Well, it’s actually a very awesome duo of a caveman and a Tyrannosaurus Rex. That’s right, a caveman fights alongside an actual T-Rex. If that sounds insane, that’s because it certainly is, but they live in an insane world. The caveman goes by the name of “Spear”, while the T-Rex is called “Fang”. They communicate through body language and growls, and they constantly fight together. It’s always so flipping fun to watch. I mean, Spear is basically a superhuman and has an inhuman survival instinct. His signature weapon is, well…. a spear. They guy can hunt anything and when he hunts with Fang, he rides on his back. I did say it was a ride.

So how does a duo between a caveman and a T-Rex work? Well, I won’t give away any spoilers, but both characters were brought together by a terrible tragedy. The cavemen, while primitive, is a man who is capable of love. We’re used to seeing a man suffer a tragedy and that becomes his launching off point. However, we can’t really say the same for a T-Rex. Watch Jurassic Park and you’ll understand why everyone is afraid of them. For the case of Fang, he’s your average T-Rex. He’s big, he’s got sharp teeth, and he likes to eat things. Fang is a dangerous animal, but even dangerous animals are capable of love.

Like Spear, Fang suffered from a tragedy that served as his launching off point. He and Spear have the same launching off point that leads them to joining forces. Their main goal is to just travel the brutal world they live in and just survive the horrors they come across. From the prehistoric predatory animals, to the mythological beasts, Spear and Fang always have their hands full. As the series goes on, we see how Spear and Fang bond throughout their journey.

That’s really the bread and butter of the series. It’s more than just a series about two heroes fighting dangerous monsters. You ever watch a movie about a man forming the unbreakable bond between man and animal? Just look at Turner and Hooch (or John Wick) and you’ll see the man and dog friendship at its best. When does it not work? It’s a relatable concept and it works for Primal. The only difference is that instead of a dog, it’s a very scary T-Rex. This T-Rex, however, doesn’t eat humans and has become best friends with one. Their chemistry is what makes the series interesting and watching them together resembles a special bond between man and animal.

The best moments that show their growing bond is when they’re fighting monsters. Sometimes Spear will be in trouble and Fang will rush to protect him. Sounds like a loyal animal companion, but Fang gets the same loyalty from Spear. Whenever Fang is about to be killed by a much bigger monster, Spear will rush in to save him. What’s most impressive about it is that he’ll often rush in with the most primitive weapons. You want an example? Imagine a caveman charging at a giant monster with just a rock. Yes, that’s right, just a small, ordinary rock. Spear will do all kinds of acrobatics to jump on top of the monster’s head and he’ll bash its head in with the rock. It’s very bloody, but also super awesome to watch.

The amount of loyalty these two characters show towards each other is incredible. Not only will they rush into danger to save one another, but when they’re just hanging out, they bicker like two quarreling brothers. They don’t always get along, and when they go at it, it’s fun to see. Even in the second episode, they nearly break apart, but when push came to shove, they decided they need each other to survive. That’s what makes this show great and that’s what will keep us interested for the second season. If you haven’t watched it on Cartoon Network yet, check it out on HBO Max.