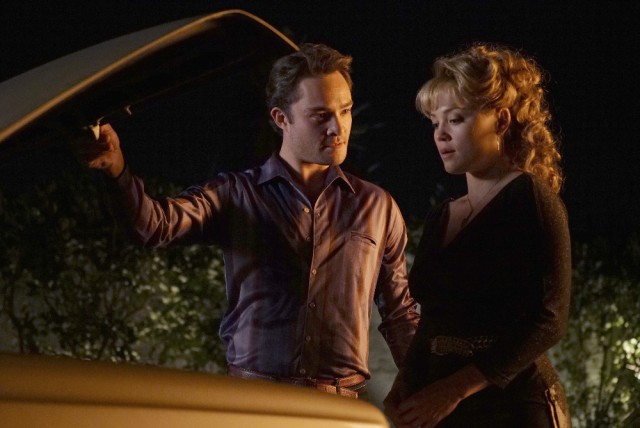 Ed Westwick gives a devious performance as a serial killer, but it is Erika Kristensen’s portrayal of Betty’s slow burning acceptance of the way he lives his life that will save Wicked City.

Kent and Betty have their first kill together, but it’s not the way you’d expect. They talk the woman they left the club with in the last episode, Mallory, into a threesome, complete with the bondage Kent used on Betty last week. This time Betty reenacts all of Kent’s methods on Mallory, complete with a much too comfortable feeling of holding a butcher knife. Kent has every intention of making Mallory his next victim by offering to take her home, but he accidentally falls asleep in Betty’s arms. Kent knows what it would mean if detectives got to question Mallory, so he has to move fast if he’s going to keep the situation contained.

Karen is understandably shaken after her encounter with Kent, but her editor, Diver, encourages her to be thorough in writing down what she remembers to write the story of a lifetime; after all, it’s a journalist’s prerogative. Diver may have a thing for Karen, which is partly why he’s trying to keep her from leaving L.A. now that she’s been spooked, but he also knows that she has the potential to be a great journalist. Jack was right in thinking that Karen was too obvious about a lot, including not realizing that the killer would know exactly where to find her. It seems Kent’s singled her out as a new player in his wicked game (pun intended).

In the meantime Jack wants to shut Diver out, but Paco realizes he can be useful if used right. Diver does in fact lead the detectives to a dealer whose drugs might lead to Mallory. We then get a blast from the past to the early glory days of MTV before they took the music out of it. It’s also interesting to see how little things like the DMV and Social Security are still giant pains three decades later. Jack and Paco are hot on Mallory’s trail, which they hope to mean they are hot on Kent’s trail as well. Kent is two steps ahead of them though, and even Betty is made aware that the police are after Kent.

Betty consciously doesn’t understand what’s going on (because let’s face it, deep down she craves Kent’s way of life). She thinks that Kent is just more into Mallory than he is into her, and she ends up giving him a lead as to where to find her. So that cat-and-mouse game continues as Kent gets to Mallory before Jack and Paco can, but they also have a lead on the upholstery garage where he works. Once again Kent is ahead of the game, leaving a body behind as a present.

Kent is cool as a cucumber, taking what he wants and manipulating what he needs. In a roundabout way he tells Betty that he needs her and wants her to see all of him. He proves it by killing Mallory right in front of Betty.

While this round and around game between Kent and the police is relatively pedestrian, and the minor subplots revolving around Detective Jack Roth and Karen are nothing new. The one bright spot is the connection between Kent and Betty, and the development of Betty’s character is what will lift this series up.