Home
ABC
Wicked City
Wicked City Season 1 Episode 3 Review: “Should I Stay or Should I Go” 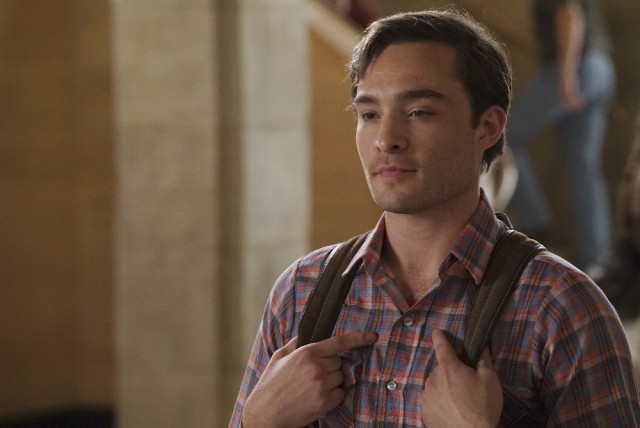 Here comes trouble. What’s scarier than one serial killer on the loose is two, which is exactly where the latest episode of Wicked City is making strides towards accomplishing.

Like a normal person, Betty is at first horrified and follows her first instinct to run. Betty’s own recount of these events as she tells it as a bedtime story to her children is actually chilling at first. It’s chilling until she omits the part about kissing Kent immediately after his kill. A normal person would turn Kent in, or at least try to if he doesn’t kill her first; not Betty. She is fascinated by Kent and his murderous ways. Kent is convinced that Betty is his missing piece and will come around. Betty isn’t sure at first, but a visit from an unwelcome ex-boyfriend allows her sadistic side to emerge, the side that wants Kent. Kent visits Betty to give her a special copy of his favorite book, The Phantom of the Opera, hoping that she will see them in the book. This she does, and consumed by love the two go on the hunt.

Karen seems to be running headlong into danger, optimistically thinking that she can help save the killer’s latest victim. Diver has more sense, knowing that she is probably grasping at straws, but he follows along nevertheless. Jack and Paco are lead on a new path, tracing the body Kent left behind to be Vera Bennett. Their search coincides with Karen’s at a local library where Kent has left them a message-Malorie’s head in a box. Kent is going to continue to toy with Karen for some time since he goes to the effort of also leaving her the only clue to finding Malorie’s body.

Jack and Paco immerse themselves in Vera Bennett’s life, knowing that she is the key to finding Kent. They find out Vera was once very close to a neighbor boy who came around a bit too much once he grew into a teenager. Since he couldn’t have her in life, he would have her in death. Jack sees that the killer took the time to dress and care for Vera’s body, complete with a wedding band. For him to let her go after all this time is pretty significant, he just doesn’t know that Betty is the reason yet.

Jack’s character is pedestrian. The case consumes him and he lets it distract him from his problems at home. He’s so consumed with the case he doesn’t pay attention when his daughter manipulates him into letting her go to a party. Where she really ends up is on the Sunset Strip with some friends. Luckily she does eventually come home safe, thus avoiding the scenario the audience was fearing.

Erika Christensen’s portrayal of a budding serial killer coming into her own is becoming more fascinating, as is the twisted love story between Betty and Kent. What isn’t lending good material to the story is the detectives’ and reporters’ overeager, one-dimensional characters.