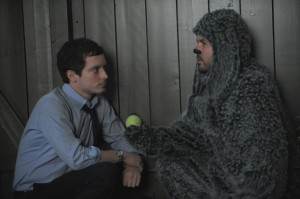 Wilfred premiered Thursday night on FX, and I have to say, it was one of the funniest episodes of television I’ve seen in a while. But it ended on a strangely mysterious note which left the intentions of Wilfred in question. The final shot of the episode showed Wilfred planting Ryan’s wallet at the scene of a house they’d just broken into. Why would Wilfred do such a thing? In an interview with EW earlier this month, stars Elijah Wood (Ryan) and Jason Gann (Wilfred) shared a little bit about the dog’s motives.

“There are motives, seemingly dark motives, underneath Wilfred’s directions occasionally,” Wood shared. “Then something will take a twist and pan out in a very different way than we expect or Ryan expects. Or perhaps he’ll take that path knowing that it’s not the right thing and then something positive will come out of it, which is always keeping it in question with whether or not the motives are genuinely pure or for Wilfred’s own interests. And I love that.Â There’s a real ambiguity.”

The man behind Wilfred himself, Jason Gann, echoed Wood’s sentiments. “His own purposes may be rooted in some sort of deep motivation or [he’s] just screwing with [Ryan]. That’s part of one of the mysteries of Wilfred.”

So what does it all mean? What is the real point behind Wilfred? “We hope people discuss this and argue about what Wilfred is and what’s supposed to be happening…. Hopefully we raise questions to the audience: ‘Is Wilfred a figment of the imagination?'”