Home
News
Will Dove Ever Recover from Horribly Racist Ad on Facebook? 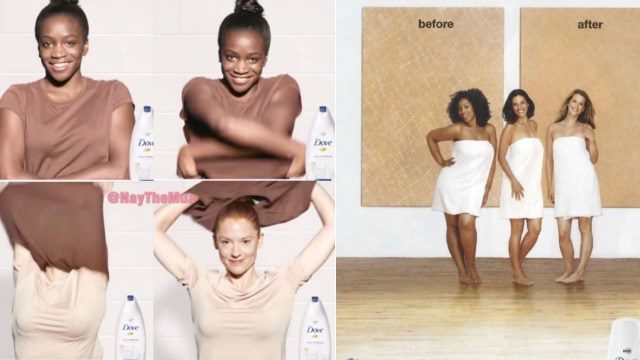 Over the years Dove has been celebrated for advertising campaigns which celebrate the diversity and beauty of women. They have been at the vanguard in promoting acceptance of the female body in its many forms. This weekend it delivered a spectacular failure in its social media campaign. The company is facing a growing backlash against a social media ad campaign that many have called a horribly racist ad. The bodywash advertisement showed a black woman in a flesh colored t shirt removing the t shirt to reveal a white woman underneath.

The criticisms and condemnations from social media users were instant and ferocious. Dove moved quickly to remove the ad from Facebook following the outcry and issued an immediate social media statement in which it admitted to missing the “mark in representing women of color thoughtfully.” The beauty product company followed up with a more detailed statement on Sunday which stated that the ad “did not represent the diversity of real beauty which is something Dove is passionate about and is core to our beliefs, and it should not have happened … we apologize deeply and sincerely for the offense that it has caused.” It remains to be seen whether Dove can weather this storm and recover from this blot to their reputation.

Defenders of the ad have asserted that the clip, which is circulating widely on social media, takes the ad out of context in so far as it only shows part of the ad. The longer version of the ad and the campaign depicts the white woman transforming into an Asian woman. They claim that the intended message is one of celebration of the wide and diverse range of beauty. This is unlikely to wash with the public. Critics are not satisfied that the extended version does much to cool the racial connotations that a black woman is fundamentally dirty and a white woman is clean.

Many argue that deeply rooted, ingrained and institutional racism provides a cultural context and backdrop to the Dove ad which simply cannot be ignored. The subconscious message implied in the ad is that the woman transforming from dark to light is in some way becoming “better”. Many black women have explained that the ad feeds into a cultural undertone that sees “blackness” as inherently problematic which can be rectified or solved. They also argue that there is a long history with the beauty industry of skin whitening products and depictions of women of color insensitively.

Suggestions that Dove was courting controversy with the ad and that the company was actively attempting to drive media attention to their products seem far-fetched. Adding fuel to this fire is the fact that Dove were previously embroiled in a very similar controversy in 2011 where a black women was depicted in a “before” picture and a white woman was shown in the “after” picture. On that occasion Dove made their apologies and dusted themselves down and moved on.

However it remains to be seen whether they can recover on this occasion. We are living through extremely challenging cultural times with racial divisions and tensions running high. In the context of such a tense cultural context it would appear reckless to stoke racial tensions in an attempt to curry headlines. If the company was behaving in such a cynical way then it is highly unlikely that they can recover from the inevitable backlash. The current situation may not be beyond repair. However Dove now have two racially insensitive strikes against them. They are unlikely to recover from a third.