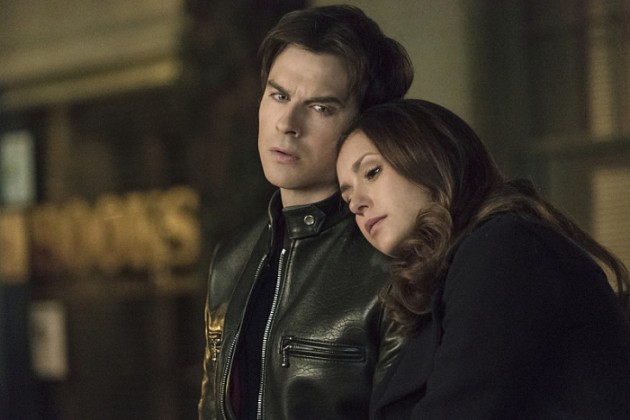 Next week is Elena Gilbert’s last episode of The Vampire Diaries, a much-hyped event, given that she’s essentially been the main character of the show since day one, though in recent years her role has been a bit reduced once the series dropped the whole “doppleganger” thing.

Nina Dobrev is moving on to (theoretically) greener pastures, and it seems to be a Smallville-like situation, where that show lost both Lex Luthor and Lana Lang at about this point in its lifespan, though Dobrev leaving is more akin to Clark Kent himself departing.

The question remains…how will she leave? I don’t mean this in the sense that the show may beÂ physically unable to continue on without her. It’s an ensemble, and as I said, Elena’s role has been pretty heavily reduced over the past two seasons, with the focus more on the Salvatore brothers themselves, and Bonnie and Caroline as well.

But rather, will she walk off into the sunset the way we saw with her brother Jeremy, earlier this season? Or will she go out in some tragic blaze of glory?

Despite the fact that it makes my wife very very sad to say this, I don’t think Elena is going to walk away from the show alive.

At the end of the last episode, we saw Kai invade Jo’s wedding and presumably kill her. If not, he certainly killed one or both of her unborn twins. Regardless, she looked pretty dead to me. And if that wasn’t enough, he exploded out all the windows of the church, knocking Elena and many others unconscious after the blast. The teaser for next week seemed to almost imply that blow alone killed her, but I very much doubt that. That said, I still think she’s not long for this world.

The Vampire DiariesÂ has been setting this up for the last few episodes now. Elena took the cure to become human, losing her vampire status forever. Unlike fellow human Matt, she does not have a bring-you-back-from-death ring, nor does she have the skills of a hunter like Alaric and Jeremy, so that makes her literally the most vulnerable character on the show.

One of the main storylines over the past couple episode of The Vampire Diaries has beenÂ Damon and whether or not he will join Elena to become a human as well. Unlike Elena, he loves being a vampire, and last night’s episode was spent trying to convince him that it was a bad idea to become human since the two of them would only get old and drift apart. But then Damon sees two old people still in love and his heart grows three sizes, and he agrees to take the cure. Of course, this was before Kai invaded the wedding, so all bets are off now.

The show certainly wasn’t going to lose both Damon AND Elana, marrying them off and having them go live in the suburbs somewhere. I don’t even think they’d be willing to lose Damon as a vampire. As such, really the only way to ensure that doesn’t happen is to kill Elena, sending Damon on a murderous rage and getting him back to the old villainous kill-happy vampire he was at the start of the show.

Given that this is The Vampire Diaries, it is very, very hard to kill someone permanently. For a long while, The Other Side captured the souls of all supernatural beings who died, and practically everyone who was sent there has come back in some form or another. Hell, Alaric came back after being dead for years. Bonnie was dead for like a whole season.

It has to be different with Elena. If they’re going to kill her, they have to really kill her. The fact that she’s human with quite literally no resurrection mechanisms in place seems like the best set-up that The Vampire Diaries isÂ ever going to have. The cure means there’s no chance she comes back as a vampire, and I don’t see Matt handing her his ring any time soon. This entire season has been setting her up to die, and honestly, that’s the way it has to be.

If she departs like Jeremy, there’s always going to be a chance that she returns. And given how big of a deal they’re making Dobrev’s departure, I don’t think that’s what she wants to do. I don’t thinks she hates the cast or crew or anything, so I wouldn’t rule out a cameo or two as some ghostly vision haunting Damon after her death, but I don’t see her pulling a Bonnie or Alaric and beating death to return and become a regular again.

What do you think? Will Elena live, or will she meet her end next week for good?