Home
Entertainment
Will We Ever See Mara Jade in a Feature Star Wars Movie? 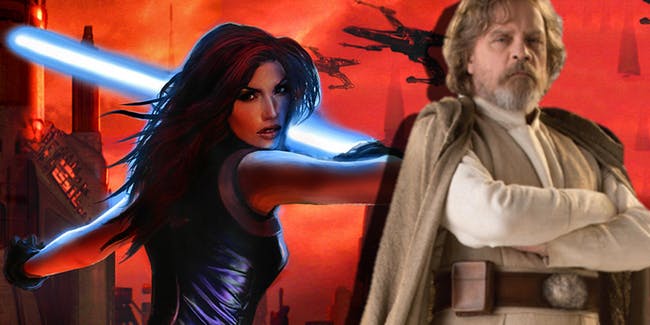 If you want the honest truth Mara Jade could be the subject of her own movie, but in the current canon it seems as though it would difficult if not impossible to create her character as she was seen in the books. She’s a very complex and yet highly popular character that some people would admit took some getting used to but others would gladly say that they liked from the start. Seeing her in a feature film would be enough to make many a fan giddy with excitement since the idea of Mara Jade being placed anywhere into the Star Wars franchise, especially in her own movie or at least as an important character, would be enough to make many fans squeal in girlish delight (guilty).

Why is she so popular you ask? Well, that’s a good question.

She didn’t start out this way but had to earn her spot as a master on the Jedi Council before the war that would disrupt the galaxy throughout the books. The Yuzhan Vong, an alien warrior race that could somehow remain unaffected by the Force, pushed the Jedi to their limits as they were tougher and more vicious than anyone that had ever attempted to take over the galaxy in the past. As a Jedi Master Mara was one of the strongest and most skilled individuals since she was able to pull from the skill set that she’d developed under her former master and employ tactics and methods that weren’t always in keeping with the Jedi code, but were useful all the same.

She was an assassin working for Emperor Palpatine.

She had a very shady beginning to be honest, as she was brought up by Darth Sidioius, or Emperor Palpatine for those that didn’t know the two are the same man. She became what was known as the Emperor’s Hand, a spy and an assassin that had strong ties to the Force and could maintain a telepathic link with her master. She and Darth Vader didn’t get along very well, but it was Sidious that put Mara on her quest to find and eliminate Luke Skywalker, a quest that, in the books, set her at odds with Vader on more than one occasion. It’s kind of amusing to think that she was being sent to kill Vader’s son before all parties involved knew the connection between the two of them. But eventually she and Luke would finally free themselves from the emperor’s hold and Mara would end up siding with Luke, and eventually marrying him.

She was killed by her own nephew, Jacen Solo.

In the Legends canon the eldest son of Han and Leia Solo, Jacen, turned to the dark side after dabbling too much in the past and doing a few questionable things that tested his loyalty to the Force and those around him. When he went over to the dark side fully however he became Darth Caedus, and went on a murderous rage that saw him become a cruel and uncaring despot that eventually had to be dealt with. Unfortunately for Mara she didn’t count on Jacen being as devious or as deadly as he really was and during their confrontation she managed to fend him off and make him run, but not before being poisoned, which led to her eventual death. In all the books there have been only a few deaths that have really hit the fans hard, and this is one of them.

Bringing her in to the current canon might revive the franchise a bit.

It’s hard to say how much of her back story would really be included in a feature film but if it was brought to light and she was finally included it would be more likely at this point that much of it would be ignored and that her connection to Luke might not be brought into play, which is saddening since the relationship between the two of them was quite touching, not to mention powerful. In the Legends canon they had a son that would eventually go on to be one of the greatest Jedi ever. But since it seems that the Skywalker line is being wrapped up it might be that if she does appear, she won’t have much to do with Luke. Unless of course Kylo was lying and there’s another angle to be played with Rey’s parentage?

It’s hard to say at this point but many fans would love to see Mara Jade come to the Star Wars franchise in a much bigger way at this point, as it would finally integrate another part of the Legends series that people have been jonesing for. Throughout the books she has been one of the most dominant and desired forces around, and seeing her on the big screen would be a treat.