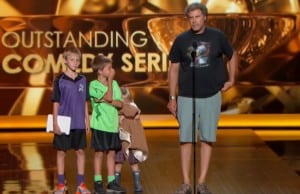 Now that some of the dust from the 2013 Emmys has settled, it is far easier for us to look at the night as a whole and pick a favorite moment. While Julia Louis Dreyfus’ moment was great (which we talked about yesterday), I have to say, the more I think about it, the more I think the moment when Will Ferrell brought his children with him on stage was the highlight of the show. Why? Because unlike most award shows and speeches, that moment felt genuine. Just a guy, on stage, who couldn’t get a sitter in time. How many young parents have been there at one point or another?

For those who may have missed the moment, it is right here, but allow me to sum it up for you. Will Ferrell appears on stage, with his three children, all boys, to present an award with him. Ferrell then points out that he couldn’t get a sitter, they had just attended a birthday party, and he had no time to do his hair. It may sound silly, but it was great to see Will Ferrell like that. The man who is known for being crazy and over-the-top, just couldn’t break away from being a Dad long enough to give that “crazy side” to any of us, which is what made the moment so memorable.

Will Ferrell is one of those actors who, much like Bill Murray before him, seems warm and genuine, and seeing him drop his wall for a moment and just be a Dad was as hilarious as it was heart-warming. It may have been a “bit”, but it worked, and that is why we will remember it.