Home
Movies
Will Poe Dameron Be the Key Character in The Last Jedi? 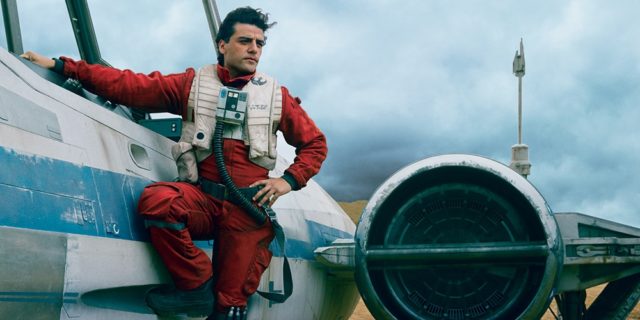 How many of you thought that much of Poe Dameron when he showed up in the The Force Awakens? Anyone think he was just a one and done kind of guy? For shame then, because Poe was being built up over and over again throughout the first movie and his role is only going to increase as the trilogy goes on. It’s been revealed that with the passing of Carrie Fisher, who is still sorely missed, Poe Dameron will be the next potential leader to whom the fading Republic and the Alliance will look to for guidance. He might not act like the part at the moment, considering that he’s still the brash, slightly arrogant pilot with the heart of gold, but General Organa has apparently been grooming her best operative for a role beyond the cockpit when the time comes.

So should we explore the whys and hows of this a little further? Yes? I thought you’d never ask.

Poe is the natural choice to lead after Leia.

There’s not a lot of people left in the Republic command and in all honesty Leia is really the only one with enough experience to really keep the ball rolling. If, and when, she goes, Poe will be the only real leader left. this is largely because she has been grooming him to become that leader behind the scenes. The story goes that Leia has seen a great deal of potential in Poe and as a result has Â been mentoring him while she’s been utilizing his skills as a fighter and a spy to gain as much knowledge about the First Order, Luke, and the lay of the land as she possibly can. Poe has been her apprentice in a way, learning from her and working his way up the ranks until he has finally become the next logical successor to Leia when she is gone. Seems like sound planning.

Poe is already a natural leader.

The only thing Poe needs to do to be a leader like Leia is gain a ton of experience and calm his more impulsive tendencies. As to the first he’ll need to survive to insure that enough time passes so he’ll be allowed to gain experience. The second point is also time-sensitive since his development is still coming along but it is becoming apparent that he’s beginning to realize that he can’t go in with guns blazing all the time. He needs to think about what he’s doing and be a step ahead of his enemies before he goes charging in. That’s what good leaders do so that they aren’t always burdened by the what-ifs left behind by their impulsive behavior. It is going to be a difficulty transition since, as a fighter pilot, Poe is used to making snap decisions and shooting first so that he’s able to think later. The development he needs to become a real leader needs to happen soon, especially before the third part of the trilogy.

Poe Dameron should easily make it into the next movie and beyond.