Home
TV News
How Will Syfy’s ‘The Expanse’ Deal With the Unusual Structure of the Book Series? 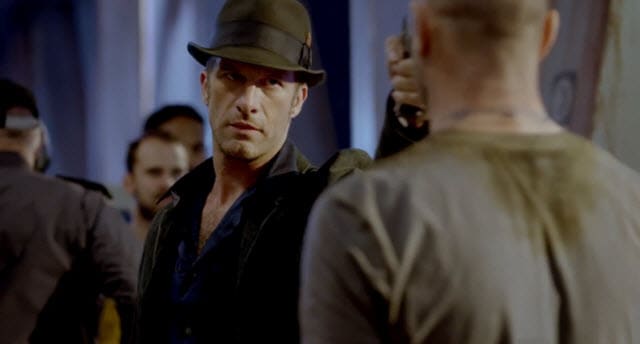 With four books down and a fifth one on the way this summer, SyFy has a lot of source material to work with in James S.A. Corey’s The Expanse series, which they’re adapting into their latest sci-fi outing. When I heard the series was being given the small screen treatment, I’ll admit I was a touch disappointed that A) it wasn’t a film series instead and B) it was on Syfy and not somewhere like HBO or AMC.

Perhaps that’s unfair, but these days it’s hard to remember the Syfy was once the network that gave us Battlestar Galactica. Even in a recent “return to sci-fi roots” push with a huge host of new sci-fi shows, I’d argue that so far none have managed to capture that Galactica magic. Perhaps The Expanse can change that.

Syfy has debuted its first official trailerÂ for the show, one that I rather like quite a bit, but it still leaves me with some questions. I think while the trailer does a pretty good job of conveying the proper tone for the series, it does relatively little to explain the story of the first book, which, admittedly, has a tough story to explain. It’s two separate mysteries, one about a ship getting destroyed by an unknown entity, the other about a girl that’s gone missing. One man, Holden, investigates the former, while another, Miller, looks into the latter, and eventually their paths merge.

Miller’s character has probably the most recognizable face in The ExpanseÂ cast,Â as Syfy has landed Thomas Jane (HBO’sÂ Hung)Â for the role. Jane isn’t exactly an A-lister, but will be known to most, though already he seems like one of the most major deviations from the book. Jane is 45, but looks probably closer to 38, and Miller is supposed to be late fifties at best in the books, and generally conceived of as older and grizzled. I think Jane would be fine in the role if it wasn’t for Breaking Bad‘s Jonathan Banks who isÂ also cast in the show and would have been a perfect Miller in my eyes. That seems like such an obvious play, but he’s in a different part I can’t name.

The show seems to be separating from the books in a few other ways as well, introducing Earth politician Avasarala well ahead of her book two debut, making her a character from the start. That could be a clue into how the show will handle the rather unusual character structure of the books.

The Expanse is unique in how it handles its multiple viewpoints. The show really only has one fixed perspective, that of Holden, the Mal Reynolds-lite captain who is the central figure in every major event across all four books so far. However, each book usually boasts at least three or four other perspectives besides Holden’s, which is where things get tricky,

Often, the book introduces a new character that serves out their run for the book, acting a part in Holden’s story. We get to know them, but by the end of the book, they’re gone. Some die, but almost all live on. They simply disappear into the universe, and I don’t think I’ve seen anyone at all get a second turn besides Holden himself, at least not outside of a Prologue or Epilogue. For example, we might spend all of book two getting to know Bobbie, a Martian Marine, yet after that, she gets one tiny prologue chapter, and one hint that she might return in book five. But that’s it. One of the series’ most memorable characters only gets one-fifth of one out of four books to herself. It’s hard to imagine how that translates well to a TV show.

Right now, Game of Thrones is just now starting to do a thing where they essentially “take chess pieces off the board” as they’ve run out of stuff for them to do. Bran and Hodor, for example, won’t show up at all next season, as their story is on pause for a while. But The Expanse will have to do that will many, many main characters each season, unless they dramatically alter the core story of the books.

All of this presumes that The Expanse will make it past one season, but I believe it will, judging by the quality of the source material, and how effective the trailer was. I think the show will be one of Syfy’s best efforts in years, but it will certainly have some adaptation challenges ahead of it.