Home
TV News
Will We Ever See a Freaks and Geeks Reboot? 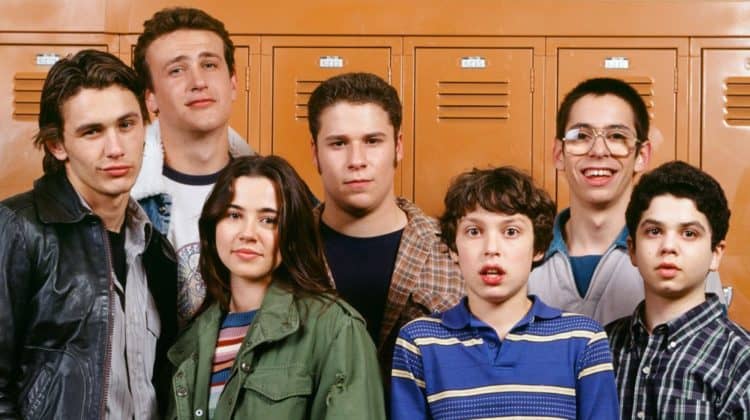 It doesn’t sound too hopeful when thinking of a chance at a reboot for Freaks and Geeks. To think that the show became so popular after it was canceled, after one season no less, is kind of funny since it managed to hook a lot of people when it came to the overall subject matter, but it didn’t enjoy the faith of those that wanted it gone. Today though people still talk about this show and it’s been a little over two decades since it enjoyed it’s one and only season, meaning that everyone from the cast has grown up and moved on with their career in various ways. To think that some of these folks were ever this young is a bit difficult given how much they’ve done at this point. But a reboot, while desired by some fans, might not be the reality that people want it to be since the one thing keeping the thing from happening is the fact that every member of the cast would simply be too expensive to bring back on set, especially since several of them are such big stars at this point. There’s always a way to do it, of course, it could happen that the main characters now have kids that are attending the same school, but even this idea feels as though it would be too cringe-worthy since Saved by the Bell has already taken this idea and run with it. While copying ideas has never been much of a big deal it still feels as though it would be a less than ideal plan.

On top of that, bringing in a new cast feels as though it might cheapen things since like it or not, the feeling in the 90s was that this show was special, even if it was just for one season. Plus, with so many people hopping on board the cancel culture train and trying their best to be as PC as they can when it comes to what they watch and what they want to see on the airwaves, the very name of the show might find itself under attack before too long. That sounds paranoid, doesn’t it? Well if it does then you might have missed the changes to the Looney Tunes and several other shows since people are taking issue with just about anything these days if they don’t think it’s worthwhile to push to viewers. Freaks and Geeks might see a reboot one day, but it certainly doesn’t appear to be on the docket for now. It’s not so much that no one wants it, as that’s not the case at all, but it’s more along the lines that people aren’t really sure of how it would go and who would take up the roles that were made so popular back in the day. When you think about it, 20 years ago is a pretty substantial amount of time, maybe not like 30 or more might be, but it’s enough for lives to change, for people to grow up and start growing older, and for attitudes to change in a big way.

Speaking of the high school experience in general, things have changed in a big way as it’s been seen in pop culture, and trying to plug all that into the show wouldn’t be difficult, but keeping the comedic feel of it might be tough since in its single season the show did strive to be as funny as it could be, but nowadays it might be that the comedy wouldn’t be fully appreciated by a lot of people. Also, diversity would be a big key that a lot of people would be looking at since if you look at the cast it’s not nearly as diverse as people would be griping about at this point. Admit it, Freaks and Geeks would be forever changed by getting a reboot, and it’s very likely that this time around things wouldn’t turn out the way people want them to since the show would likely need to change way too much to accommodate those that want to see certain things happen and certain developments take place to make sure the show is being sensitive to everyone’s needs. It feels a bit petty to say this, but Freaks and Geeks was what we considered fairly normal back in the day, and at this point in time the word normal has undergone a lot of changes and has become something that is hardly recognizable as was back in the day when many of us were still growing up.

So a reboot might not be in the cards for now, but it’s a safe bet that if someone did come up with the idea that the show would be hard to recognize once it hit the airwaves, and fans would be able to notice pretty easily.