Home
TV News
Will We Ever See a Killer Klowns from Outer Space Reboot? 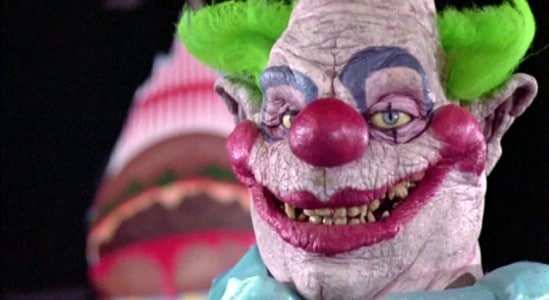 Anyone thinking that Disney, who unfortunately owns Killer Klowns from Outer Space at this point, is going to up and say ‘okay’ to a reboot hasn’t watched much of the Mouse House as of late. Kevin Burwick of MovieWeb and several others appear to be psyched to see a reboot of this cult classic and really there are several reasons why it should and shouldn’t be allowed since the movie didn’t perform well, what a shock, and yet it did become a movie that people are willing to sit through and laugh at. Creating a reboot would be kind of tough if only because Disney isn’t really in the horror industry no matter that they now own a good number of movies and properties that could allow them to expand if only they’d keep it separate and not look to take the edge off of everything. Look at it this way, several other studios have done family-friendly movies and hardcore, in your face horror, action, and thriller movies that rest at the other end of the spectrum. In a way this kind of shows just how limited the Mouse House really is in their thinking and their application if they don’t even bother considering this proposal. A lot of people are more than willing to see a reboot of this movie come to theaters or just to streaming since propelling it on to the big screen doesn’t really sound like the best idea in the world, largely because it’s not bound to happen for some time.

The chances are that even if the coronavirus happened to vanish tomorrow this movie would still be on the back burner most likely since like it or not, it’s not a huge priority to that many people and it might even be forgotten after a while. In terms of being a cult classic it’s likely always going to keep popping up again and again if only because it’s one of those that is just ridiculous enough for people to enjoy. Think about it, clowns from outer space that capture people in cotton candy cocoons and then drink them once they’ve been liquefied. Plus they have a host of other gadgets and abilities that can allow them to capture or kill humans such as shadow animals, acidic pies that can melt a person, and various other devices that are every bit as creepy. There’s definitely a market for this kind of thing but it would be kept as a B status movie largely because that’s where it started and that’s about where it’s going to end up simply because it is kind of a stupid idea that made a lot of people pay attention for the comedic quality it brought.

It did manage to keep the fear of clowns going however as throughout history many people have had issues with clowns for one reason or another, largely because there is something inherently creepy about them even if they are supposed to make people laugh and even feel jolly. In pop culture there are plenty of positive clowns, but the grease paint and baggy clothing has also been used in a very horrific and sarcastic manner throughout the history of TV and movies as well. IT by Stephen King is one massive example of why people are afraid of clowns, despite the fact that the creature took the form of a clown as one of its many faces. There are many other ways that clowns have been used as well, such as in the Animaniacs when Wakko goes postal on a clown that’s been sent for his birthday, or in Malcolm in the Middle when Hal and his sons get into a fight with a group of birthday clowns when one of them calls Lois ‘Wide Ride’. Even the movie Uncle Buck has a scene with a clown that’s anything but positive since the aforementioned Buck clobbers the entertainer after finding out that he’s still drunk and about to perform for kids. Clowns aren’t always so ill-received when it comes to movies and TV, but they’ve definitely been spread across the spectrum in a big way, and horror is definitely one of those that people have taken to over the years. Rachel Dicker of US News has a list of other clowns that people have been watching for years.

Whether or not we see Killer Klowns from Outer Space rebooted it’s still available on Netflix as of now and is bound to keep coming around as long as people want to see it since really it’s one of those movies that just doesn’t go away. It’s corny, it’s cheesy, but it’s still a lot of fun to watch since it’s the type of movie that might make a person yell at the screen when someone does something incredibly dumb that, by some unwritten law of horror movies, they probably shouldn’t have done. But when it comes to a reboot, don’t hold your breath just yet.