Home
Entertainment
Will We See a House of 1000 Corpses Musical from Rob Zombie? 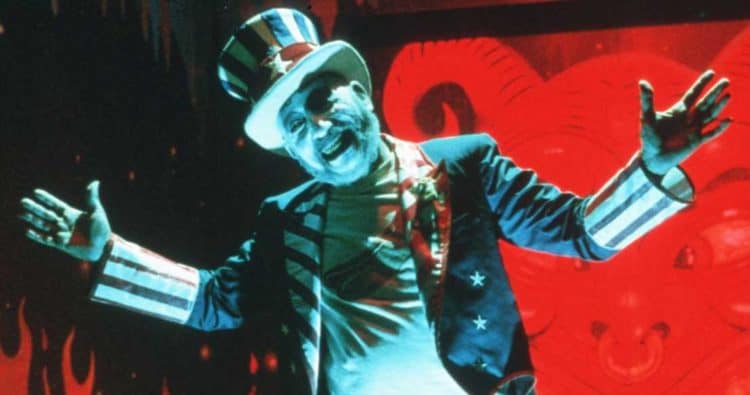 How in the world would you react to see House of 1,000 Corpses as a musical? Ryan Scott from MovieWeb apparently found out that Rob Zombie is actually thinking about this since it would seem that anything and everything under the sun is starting to be seen in the theater, though it’s still hard to equate just why this might be seen as a good idea instead of keeping it on the big screen. It’s true that the prestige of being on stage definitely ups the value of a production sometimes, but the Firefly family seems like it belongs where the biggest audiences can see it, otherwise it feels as though the production might rest on Rob Zombie’s name more than the movie it’s going to be based on. Whether he really does it or not is bound to be an interesting idea to many people, but it would definitely seem as though it might be better if he just lets this one be.

As Stephi Wild of Broadway World has written, Zombie fully admits that his movie is ridiculous no matter how many people locked onto it and decided to popularize the Firefly family and the workings of a truly insane story. But for all that he’s still convinced that it could work as a Broadway play, where it’s already been seen that more than one oddball idea has been seen to capture the attention of the audience. It’s enough to heave a sigh and wonder just what direction entertainment is going in when the varied and extremely disturbing ideas that are getting tossed around seem to stick and resonate with so many people these days. One might say that it’s the lessening of inhibitions and the broadening what art really is, but that would be way too simplistic and not at all indicative of just what is really going on. Art is in fact something that is hard to give a real definition to and the application and presentation process is also something that’s kind of hard to really pin down, so thinking that this wouldn’t work would be far too dismissive since it would be denying that the idea has any merit at all. There have been some truly horrendous and disturbing stage shows that have come along that weren’t based on horror, so it’s a fair statement to make that it could work, so long as it was handled with some care and decency and not allowed to roam down the bloody and psychotic halls that made it so campy in the first place.

Chad Childers of LoudWire writes that Zombie seems to see Broadway as being kind of like Las Vegas in that it’s not bound to change the main acts until something equally great or even greater comes along to replace it. That makes a lot of sense really since if you take a look at both Vegas and Broadway you can see that they’ve enjoyed spinning out the same acts again and again in order to keep people happy so long as they work and so long as the talent is able to perform. It might seem to get a bit stale after a while to some, but it’s been seen more than once that once a show has gained a bit of popularity it tends to stick around for a while. Zombie’s idea that this could work after a decade or so had passed is likely something that could inspire others to take up the call as well and try to push for this to happen. There have been crazier ideas abounding in the past and while this movie seems like it might be one that wouldn’t really fit well on the stage in some ways, it also seems as though Broadway might be changing its tune nowadays as some of the shows that have come around have been the type of thing that years ago wouldn’t even be considered let alone loved by the audience. So it does seem to be that House of 1,000 Corpses might have shot and could be making its way to the stage eventually, but as of now there’s really no idea just when that would be.

Theater has definitely changed over the years. It’s the natural progression of humanity of course, and people enjoying carnage isn’t exactly a new development. Since the earliest days of humanity there have been those that have, for some reason, marveled at the depraved and insane acts that some human beings seem so capable of, even if they’ve been dramatized for stage and film. But bringing this movie to Broadway almost feels like it might initiate yet another shift in what passes for a successful stage play. It’s true that the standards of the theater have changed over the years, but this seems like a new evolution waiting to happen.