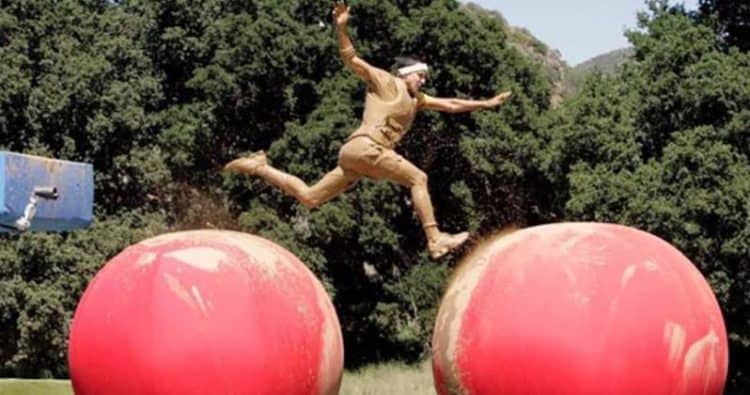 There’s been word that the show Wipeout is coming back for a little while now, and it would appear that the hosts have been found as John Cena, Nicole Byer, and Camille Kostek will be taking over the duties as they comment on and present the obstacle course that a lot of people have come to know as one of the most fun but also most challenging on TV. If anyone was guessing the big red ball course will be coming back, but it does sound as though there might be a lot of changes coming to the show and as one might be able to guess the rest of the courses will no doubt feature some well-known obstacles, but there will be plenty of new stuff as well. The one thing about Wipeout is that anyone can watch the show and claim that they could make their way across the course with ease, but watching the actual spills and hits that the contestants take should make it possible for a lot of people to reassess their original statement since when it comes to obstacle courses most shows wish to take those that are in decent shape for obvious reasons. One reason of course is that they give the show a little more push when it comes to their appearance, and the other is that those in better shape are generally able to put on a better show and possibly endure the course a lot better than those that are obviously overweight and have been hitting the local McDonalds more often than the weight room.

The thing about Wipeout is that it does require a good deal of strength and stamina but there’s a lot to be said for poise and grace as well since if anyone has ever watched the show, the obstacles presented to the contestants are indeed kind of tough and require timing, a lot of upper and lower body strength, but also a great deal of balance since the materials used to create each obstacle aren’t exactly steady considering that the contestants do need a soft area to land on when they inevitably fall. Note that part very quickly, since the ‘inevitable’ part is hard to get away from since one way or another, people are going to fall when it comes to Wipeout. A person would almost have to be superhuman to get through a course without falling at least once. But that is one of the main points of the show since the falling is a big part of the enjoyment for a lot of people, though some of the hits do look as though they would hurt quite a bit. Give his time in the ring John Cena could possibly tell people just how much it might actually hurt when someone is getting knocked off one of the obstacles, and it’s easy to think that his commentary will be interesting enough to keep watching.

While this is a big opportunity for all three hosts, it’s definitely an interesting move for Cena, who’s been attempting to make his way into the movies almost like Dwayne Johnson as he’s been slowly transitioning from the WWE. While it’s not a big desire to compare him to Johnson, it’s also not quite accurate since Cena has been cast in a starring role only to find that the movie didn’t perform quite as well as those behind it might have liked. He’s been in a few movies since but at the moment his big appearance in the next Fast and Furious is still waiting to be revealed, while at the moment it would appear that a TV spot is going to be his next big claim to fame. It does leave a question as to whether Cena is thinking of leaving the WWE altogether, but so far it does look as though he’ll continue to go back now and then. As far as his stint on TV goes it doesn’t feel as though it would be too hard to keep up with both shows since his time with the WWE has likely shown him that staying on the move is just part of the job.

In the meantime, it’s going to be interesting to see how Wipeout is received this time around since it’s been a fun show since it was created, but there are plenty of people that might wonder how and why it’s still being kept around and still considered a favorite. One big reason is that it allows us to laugh and to have fun watching those that are doing their absolute best to navigate a difficult obstacle course keep their balance with each step. In other words, it’s just a fun show, no more and no less, and it’s definitely what’s needed at this time.