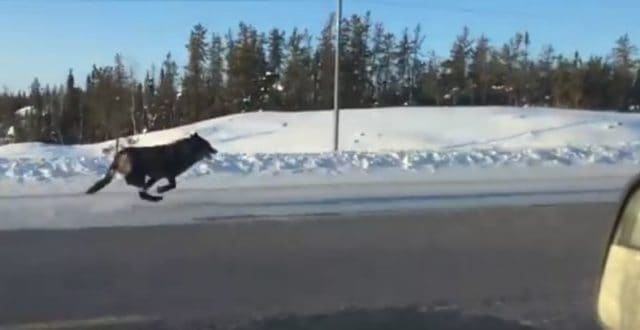 A video went viral this week of a woman filming two massive black wolves running on the highway at what appears to be a speed of around 30 mph.Â  In Canada, a woman by the name of Rhonda Miller was on her way to work on what appears to be an empty highway when she spotted to unfamiliar animals on the side of the road.Â Â  At the time she spotted the first animal she initially thought it was a man.Â Â  “I thought that was strange because you don’t normally see people walking on the road that far out,” Miller said. “I slowed down a bit and I got closer. I thought it was a bear, and I thought, it can’t be a bear because it was the wrong time of year.”

But then as she got closer she saw another figure.Â  When she looked a little closer she realized these were two giant black wolves.Â Â Â  Here’s more of her story via Facebook.

“My body immediately became afraid,” Miller said. “I was so struck by the size of their heads and their jaws.” The woman decided to follow the animals for a couple of minutes and film them as they ran alongside her vehicle. She wanted to record it as she thought no one would believe what she saw. “So many men have asked, how fast were they going? Had I been a man I may have looked. I don’t know. I think between 40 and 50 [km/h]… it was fast.” No wonder her video went viral. “Everybody was just amazed. I think just the power of them and the beauty of them, seeing them running like that, flat out, is pretty inspiring.”

This video is pretty amazing.Â  I’m personally not a fan of the accompanying music but other than that, how often do you ever see two wolves running like that in sync with a car?