Home
The X Factor
X-Factor – Kardashian out, Lopez in 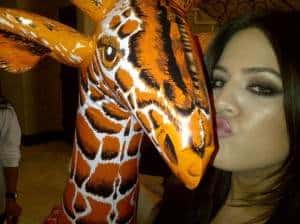 Alright for the last time: Kardashians are not real celebrities.Â  They can’t sing, they can’t act, all they do is make sex tapes and spend money.Â  The closest anyone has come so far to cementing the Kardashian name as something other than a reality show for real people to make fun of, or a sales pitch for Vivid entertainment, was Khloe Kardashian when she managed to land a hosting gig on The X Factor.Â  Well, “Khloe Kardashian will not be returning to co-host The X Factor. We really enjoyed working with her and wish her all the best in her future endeavors,”Â  The X Factor’s producers announced today.Â  So repeat after me:Â  “Kardashians are rich people who exist to be made fun of by NORMAL people, not to be become real celebs.”Â  There.

As for Mario Lopez, he will be coming back for another season as ‘Host’ of The X Factor. Is he going to be Host in the singular, or Co-Host?Â  That much is not known at the present but last season the well seasoned and actual celebrity Maria Lopez pretty much held the show together from a hosting perspective while Khloe showed a pitiful lack of hosting chops and wound up being ridiculed by fans.

As far as the regulars on the series go,Â  Simon Cowell is definitely back, as is Demi Lavato, while The X Factor’s other train wreck Britney Spears has left and LA Reid has sadly left the show.Â Â  The X Factor has struggled ratings wise since its inception, but if they are able to finally get the act together on the hosting end and the judging side of things the series could have a serious chance at taking over American Idol’s spot as ratings darling at FOX, particularly considering Idol’s pitiful performance in the ratings.

Cowell himself sounded off on the announcement, but notice he did not give the departing Kardashian a single peep. “I’m thrilled Mario is back for Season Three of The X Factor. Hosting a live show and keeping the judges – especially Demi – in line, is not an easy job, but Mario is a pro and we are glad he’s coming back,” Cowell said in statement.

It could be that The X Factor is going to go for a more mature show this season and ditch the more ‘colorful’ personalities.Â  Not that Britney and Khloe don’t attract viewers, but its usually during a half hour gossip rag that they would find themselves featured performers these days.Â  Even Lavato was thought of as a sort of sensationalist casting choose when she was brought on board, but she has recovered nicely and become a huge asset to the show.

Arguably, American Idol went the sensationalist route with their dueling-divas routing involving Nicki and Mariah Carey, giving The X Factor the opportunity to see the formula fail somewhere else other than in their own time-slot.

It may well turn out that The X Factor’s more mature approach in casting will help save FOX’s dominance in the singing-show arena.Â  But damn, who else is going to miss LA Reid?