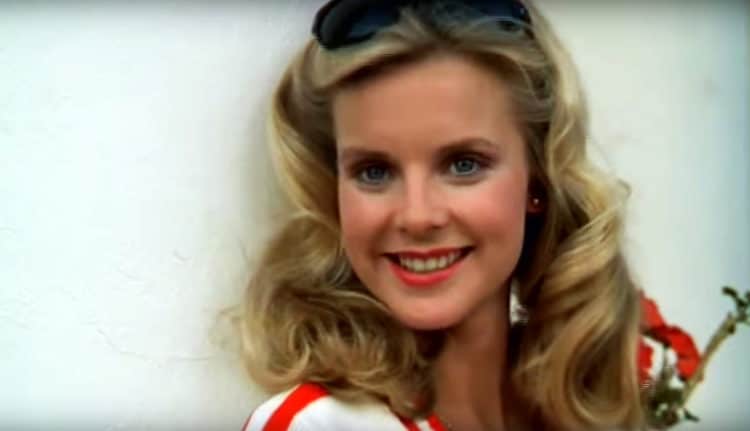 How many people still remember Julia Montgomery? This kind of commercial, and the revelation behind it, kind of makes me want to go out and find out just how many other older actors are taking parts in commercials at this time since trying to recognize her from her Revenge of the Nerds days is kind of hard to do at this point. She’s still an attractive woman to be certain, but Julia has definitely changed as the years have worn on. To be fair some people age and don’t really change their looks for better or worse, they stay the same people that you can remember from years ago that are easy to pick out of a crowd. But then there are people that somehow change their looks throughout the years until once you look again you realize that they’re still the same person, but they’ve changed in such a way that it’s almost like looking at a stranger. Again I’ll say this, that Julia has aged quite well and the fact that she’s in her 60s hasn’t diminished her that much at all, but seriously, she does look like a different person in a way. Maybe it’s just me, maybe someone else will see it, but it is interesting to think of how many other actors might be out there acting in commercials and infomercials without anyone being the wiser.

There are a couple of different ways this can be viewed, however, and while it’s kind of pessimistic to see things in this light, doing commercials can either mean that a person is too old or doesn’t have enough talent to do anything but commercials. In this case that’s definitely not what it is since Julia has proven over the years that she’s a very talented actress. But there are those out there that would likely get relegated to making commercials simply because they can’t do much else. Then there’s the idea that time has kind of passed a person by, and while Julia is still active, this is a little closer to the truth since her name isn’t quite as well known any longer, save to those that remember her in one of the most iconic roles of her career and the 80s. Come on, who didn’t think that Betty Childs was one of the hottest women in the movies in her time? There are still plenty of people that will point out the ‘disturbing’ moment in Revenge of the Nerds when Lewis ‘took advantage’ of Betty under the guise of being her boyfriend, meaning she couldn’t consent. But there are still a lot of us that remember the big smile the character had on her face upon finding out how skilled Lewis was after the initial shock of finding out it was him. Apparently that doesn’t soothe a lot of people though, and it’s one reason why Revenge of the Nerds has been seen as a fairly disturbing remnant of the past when movies were allowed to get away with a lot more.

It doesn’t really matter when a person says ‘it was a different time’ since people of this day and age are going to believe what they want and there’s not much anyone can do to convince them otherwise. But Julia and the rest of the cast didn’t see in the same light, though she did happen to say that she believed the scene could be fleshed out a little more if only to give a bit of explanation to the whole thing. It’s enough to make a person think that had this happened, people still wouldn’t be okay with it now since satire is quickly fading out in a way that’s kind of depressing given what we as audience members used to think was hilarious. It used to be that people could take a joke, that a movie wouldn’t be analyzed from top to bottom, and then ripped to pieces to take whatever a person wanted from it and make accusations about how ‘good’ or ‘bad’ it really was. Nowadays movies that still have scandalous material in them are called artistic and representative of the modern era, but a movie from the past is just harmful and problematic. Oh yeah, that’s the era we live in, but oh well.

As far as Julia is concerned the movie is in the rearview and has been for a long time since the Nerds movies have been done and over with for years. But the great thing is that we’ll continue to remember for a long time to come since along with the rest of the cast she made a movie that was worth remembering and is still seen as one of the absolute classics that people love to watch. She might not be a big movie star any longer, but she’s still doing her thing, which is great to see.