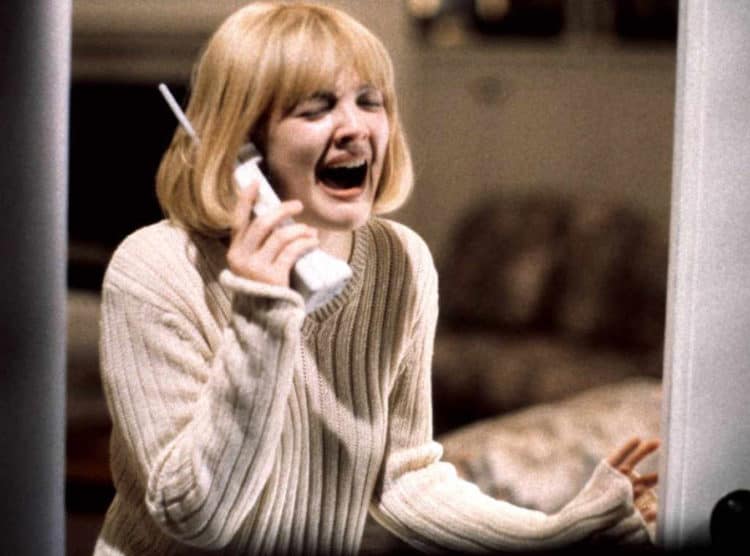 Scream is an idea that could have stopped at the first movie and been just fine. Instead we received three horrible sequels AND a TV show and, wonder of wonders, a movie within a movie that helped to fuel the continued mayhem that was taken along one jagged line after another that proves that people just want to see carnage no matter how far out the reasoning and story line needs to get. While trying to ignore that Sezin Koehler of Looper actually seems to think that The Ruins, Dragonfly, and The Happening are successful horror movies, it’s equally tough to think that any possible theory could bring this story back to prominence when the last movie involved Sidney’s insanely jealous cousin, and her boyfriend, who decided to recreate the murders so as to get out from Sidney’s shadow. And people bought that? It would appear so since the fourth movie came out and was given at least some attention despite being a walking dumpster fire with gallons of fake blood spilling out behind it.

Now comes a fifth movie that we don’t know a whole lot about thus far but can easily guess is going to be an addition that might be a legacy, sequel, reboot, or whatever might come from the unholy pairing of the three. It does sound as though Neve Campbell had no idea there was going to be a fifth movie, but it also sounds as though Jamie Campbell is on board with at least one of the theories running around at this time, which is that Randy isn’t really dead and has been masterminding the whole bit this entire time. Somehow that’s about the only theory that makes sense considering that Sidney is his dream girl and at one point scaring her into his arms might have been the trick, but perhaps making her last until the final reel was the actual coup de grace he was going for. In fact, Jamie is actually on board with this idea as he stated:

“I think this is an interesting angle. And I think I know why he did it.”Â

Not to be mean, but Jamie Kennedy is best known for his contributions to Scream as kind of a nerdy know-it-all with a serious crush on Sidney and not much more ambition than a fanboy looking to make a name for himself while failing miserably. I can hear it now ‘or IS he?’, and to be honest if this is the angle they go with then they might as well bring yet another of Maureen’s illegitimate children out of the wings and have them contract a sudden bout of “Sidney must die” syndrome as well since revisiting old wounds hasn’t gone that well for the Scream franchise thus far. Even Jeremy Dick of MovieWeb seems to think it might be a good idea to revive ol’ Randy. In fact it almost seems as though the TV show was trying to take the madness of the movies and separate from the rest of it since it was only loosely based on what came before. As far as ‘reinventing’ the slasher movie as some would like to say, Scream can be credited with doing something fairly new when it first came out, but eventually it did what all horror movies tend to do, it believed in its own hype and as a result got sloppy, lazy, and started pulling things out of the weeds without bothering to clean them off first. This of course resulted in getting the slop that we felt the need to sit through more than once since some folks had to make sure that what they’d sat through the first time was in fact an actual attempt at a movie and not just someone projectile vomiting a bunch of dialogue and thriller sequences onto the screen. A little graphic I know but it serves the point of letting people know that the Scream sequels were NOT good.

Want to know what the best way to go would be? Scream 5 needs to be THE END. Even if Randy comes back and is seen to have faked his own death, even if he had a hand in all of it, this movie needs to be the last, final scream that’s ever made, as in movies, TV shows, the works. Make Sidney the killer, have her run roughshod on everyone that had something to do with the movies, and end it in a way that doesn’t leave any of the originals alive. THAT would be innovative, that would be new, and it would certainly leave people wondering what in the hell they just watched and why would the filmmakers dare to dash their dreams that Sidney, Ms. Invincible, could ever turn out to be less than perfect. Michael Kennedy of ScreenRant seems to think that it might be a good idea as well. There, ending wrapped and delivered, it’s just too bad that’s not how Hollywood does things.