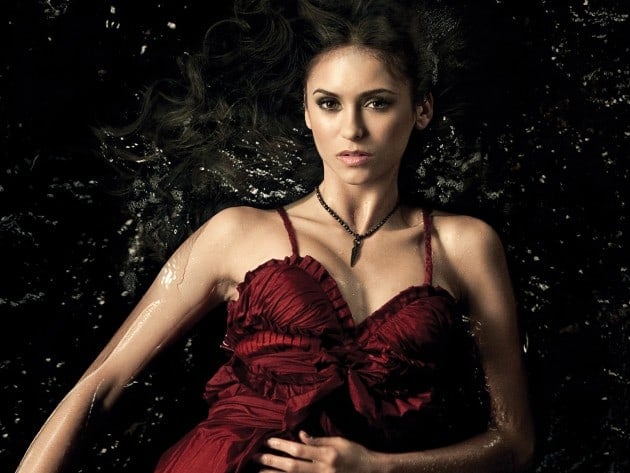 I was pretty stunned to learn yesterday that Nina Dobrev, aka Elena Gilbert, was leaving The Vampire Diaries after Season 6,Â which is currently airing and has only a few episodes left. Also departing is Michael Trevino/Tyler Lockwood, but his character has been in and out of The Vampire Diaries for years now. The real story is Dobrev and her unexpected exit.

In a statement, Dobrev claims that there was always a six-year plan in place for her character, though that seems odd given that she has essentially been the lead of the show since the beginning. I would compare this to say, Kristen Kreuk or Michael Rosenbaum leaving Smallville around this point in the series, but as important as Lana Lang and Lex Luthor were to Superman mythology, they were still supporting characters. Dobrev leaving is more equivalent to if Clark Kent himself had left the show instead.

As I stopped to think about that, it’s easy to miss a distinct shift in The Vampire Diaries lately. One where Dobrev’s Elena has gone from series lead and focal point of every plotline to a supporting character herself.

For years, she was The Vampire Diaries. The show was all about her transformation into a vampire, her love triangle with the Salvatore brothers, and her endless parade of doppelgangers who showed up to cause trouble.

But lately? Elena has had little to do and has taken a backseat to nearly everyone else. Her major plotline over the course of the past year was that she was trying to get her memories of Damon back, which she’d erased after his supposed death. It’s hardly been compelling, and really, even last year in Season 5, despite a “witches need the blood of the doppelganger” plotline, she didn’t have all that important of a role then either. Over the past two years, Elena really has been a supporting character on the series.

Enter Caroline and Bonnie, who have been far more relevant characters in the show in The Vampire Diaries‘ fifth and sixth seasons. Bonnie was key in destroying the Other Side in Season 5, and this year, her escape from a prison world has been one of the primary plotlines of the show. Caroline, meanwhile, has more or less assumed Elena’s role as TVD‘sÂ female lead. She has dealt with her mother dying and now looks to become the focus of the entire show, as she’s turned off her emotions and has gone on a bad-behavior spree with the also-emotionless Stefan.

And Elena is doing…what, exactly?

The fact is that The Vampire DiariesÂ has kind of outgrown her. They focused on her “doppleganger” plotlines for so, so many years, that once those ran out of steam, the writers really didn’t know what to do with her. Even though the point of the entire series seemed to be that she was supposed to end up with Stefan as her destiny, fans loved her connection with Damon so much more that it became pretty much ironclad. Unfortunately, that has led to some really stupid plot turns like her memory erasure.

When Dobrev leaves, that means that The Vampire Diaries will lose both Gilberts this season, as Jeremy also departed in a weird, unexpected send-off earlier this year. My theory with him was that he may show up again in another CW project, as the channel tends to recycle actors, and he was literally only in a handful of episodes all year. However, given how key Dobrev was in The Vampire Diaries, I have a hunch she’s going to try to be a movie star rather than show up in another CW program. Her departure seems to come with no ill feelings. It’s just been six years, and she wants to do something else. I can’t really blame her, and especially not when her character has been rendered irrelevant the past couple years.

Dobrev is much more talented than the average CW pretty face. Back when she was playing both Elena and Katherine, she was almost into Tatiana Maslany Orphan BlackÂ territory with how different and distinct the characters were from one another, and how she had to act opposite herself in many scenes. I think she’ll do fine free from the show.

Now the question is….how will she leave? Given how strong her attachment is to Damon, I don’t think she can simply pull a Jeremy and get on a bus to somewhere. Rather, they’ll probably have to kill her, which could have huge implications for everything in the show. Damon will obviously go nuts, and if they say, have Caroline kill her while her emotions are off, that could shatter the entire friendship dynamic of the core group, and turn them all against each other. But if she does die, they’re going to have to find a way to make it very clearly permanent, as the show has a bad habit of bringing all its dead back in some form or another. Alaric, for example, was literally dead for years until the show decided to bring him back to life. But it’s clear Dobrev doesn’t want to be put in cold storage.

It’s a weird development, and I really can’t think of many other shows where the lead character has left. But given the ensemble nature of the cast and the fact that Dobrev’s role has been scaled down in recent years, The Vampire Diaries will live on.