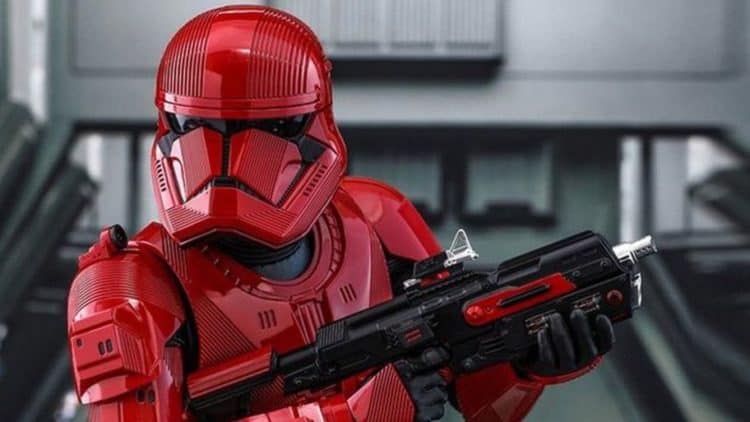 It’s amazing how the evolution of Stormtrooper has continued onward but it’s not all that surprising since it’s been needing to happen with each passing movie given how much of a joke they’ve been. The Stormtroopers in many ways are supposed to be insanely scary since there are so many of them and the Empire tosses great numbers of troopers at their enemies in an effort to overwhelm them, and a lot of times it works. But the funny thing is that a lot of people know if there’s only a few Stormtroopers around or even one full company there’s a good chance that the heroes or whoever is in their sights will be making it out okay since as it’s been seen more often than not Stormtroopers can’t really hit anything. As they’ve evolved however things have been happening in a way that is kind of interesting since the design and the training seem to have improved and the troopers have come more specialized and thereby a little more deadly. At this point we’ve seen the regular troopers, then the Hoth troopers, followed by the scout troopers, and of course the TIE pilots, and then in Rogue One the Death troopers. After that came the First Order troopers, then the Scariff troopers, and now it would appear that we’re going to be getting Sith troopers as well.

One thing that’s been pretty standard throughout the Star Wars franchise is that Stormtroopers have always been poor shots, and usually only seem to hit anything when there’s enough of them or they get extremely lucky. There have been moments however when they’ve managed to slow down and actually hit something when it’s bound to push the story forward in some way, though in the comics and the books they’ve been absolutely deadly. One instance in which the story could have been instantly different came during A New Hope when Han and Chewbacca went charging after several armed troopers on the Death Star only to run into an entire squadron that was apparently taken by surprise. This is kind of funny really since in the stories they’re trained to always be on alert for just about anything and as a rule Han and Chewie should have been gunned down or at least stunned into submission. But Stormtroopers in the movie always seem to be conveniently surprised or otherwise fooled by a person moving ever so slightly to the left or right, and their shots go completely wild as a result. As the years have gone on however the troopers have improved ever so slightly since they’ve been able to hit more targets as the movies have gone forward, and not just those that are inconsequential to the scene, as in the extras that serve as Rebel Alliance troops that can be nixed at a moment’s notice, much like the red shirts in a Star Trek episode away team.

The look of the Stormtroopers has improved greatly over the years since initially the whole death’s head appearance was something quite eerie to behold, but as it continued to change some people were impressed and others weren’t so much. Some of the trooper designs were kind of impressive, and the First Order design was definitely a contemporary look that worked. Captain Phasma in fact was one of the more notable improvements, but she wasn’t going to be replicated over and over as anyone could tell. This was a character that was meant to be her own entity, someone that was one of the best that the troopers had seen, ever. And yet she was given what many still believe was one of the worst death scenes in the entire movie in The Last Jedi, as if anyone has read the book based around her story they would know very well that she is far tougher than most troopers and is fully capable of holding her own with almost anyone. In fact the only troopers that might actually give her any trouble would be the Death or Sith troopers since from the sounds of their name they are the elite of the elite, the group that are specifically designed to be the absolute toughest that the Empire and the First Order could put together. In this manner the red armor of the Sith troopers is intimidating as hell and seems to indicate that they might specialize in types of combat that might blow the other troopers out of the water.

It’s going to be very interesting to see what the Sith troopers are all about in the Rise of Skywalker since the mere designation that they’ve been given implies that they’re going to be absolutely deadly and quite possibly a serious upgrade from any trooper that’s ever come before. The Sith were by far and large a deadly force when they were in power, but with these troopers it would seem that they’re simply elite soldiers, not actual Force sensitives. Still, seeing how really superior they are is something that fans are undoubtedly waiting for.