Home
Young and The Restless
Young and the Restless Spoilers Rivalry Week: Phyllis and Nick 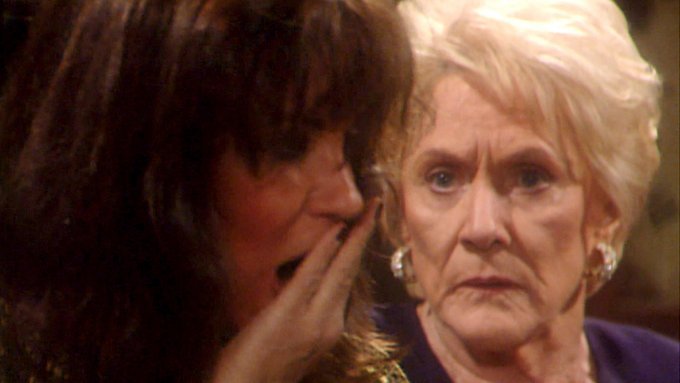 Young and the Restless fans love rivalry week, though we much point out that it feels like every week is rivalry week around here. We donâ€™t have to go back in time to find people trying to take the others down. As a matter of fact, we left off with our new episodes watching has Adam and Chelsea try to destroy his family, as Billy works to destroy people, as Victoria tries to make everyone miserable, and as Nick and Phyllis work to get what they want. Victor is hiding things, and his wife knows this, there is so much we cannot see happening until the new shows are back on one day, but thatâ€™s what we left with â€“ rivals in the same family. Today, though, we get to see a moment where Nikki decides she hates Sharon more than anything in the world, but we get it. She did just divorce Nikkiâ€™s son and marry her own husband, so we get where the general disdain is coming fromâ€¦.but we also get to see Nick and Phyllis as they both handle some tragedy of their own during this episode that originally aired in 2012. We want to discuss some pivotal moments that belong to Phyllis and Nick.

The Beginning of their Affair

These two did not have a thing for a long time after she came to town. Thatâ€™s not entirely like what usually happens when new people end up with old people in a matter of minutes and then go through everyone in a year or so. She was around for what felt like a long time before she and Nick decided to have an affair. It was horrible timing, and we get why everyone hated them at first. You see, Nick and Sharon were married when he and Phyllis began their affair. Not only were they married at the time, they had just lost their daughter, Cassie. They were both grieving, but not together. Instead of turning to one another, he turned to Phyllis. Sharon was furious.

To make matters worse, while he and Sharon were grieving the loss of their daughter and his affair at the same time, he also got Phyllis pregnant. So, there is his wife, Sharon, without her daughter, and there is her husband about to become a father once again. It was a horrifying moment for Sharon, and Nick decided to make things that much worse by then deciding he didnâ€™t even want to try and work things out with Sharon. He wanted to be with Phyllis, so he left his wife and went to be with her and his unborn daughter, Summer.

Phyllis and Nick were married, but their marriage was a rocky one. There was Phyllisâ€™ arrest, there was the time everyone thought Nick was dead for months before he showed up back in Genoa City without most of his memory â€“ he still thought he was married to Sharon. Phyllis did all she could to get Brad Carlton to try and seduce Sharon since theyâ€™d already had an affair once before. She figured this would crush Nick and heâ€™d come back to her, but it did not work. He slept with Sharon at the Abbott cabin, got her pregnant, and they had Faith. Phyllis did all she could to keep her husband, but he left her for his ex-wife and new baby mama.

Despite their marriage not working out, they have always found their way back to one another throughout the years. They have a lot of chemistry, they are friends, and they have managed to always end up in bed together. Right now, for instance. And, last year when he was engaged to be remarried to Sharon, he ended up being left at the altar when she found out he was, once again, sleeping with Phyllis. They have such a close friendship, but they donâ€™t know how to stop it at that and leave things alone. They will always be one anotherâ€™s weakness, though they just donâ€™t belong together. They both have others who are far better for them, if you ask us how we feel about the entire situation that theyâ€™ve caused over the years.