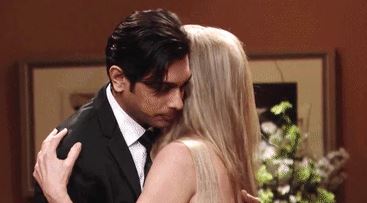 Young and the Restless fans are finally getting to see Ashley take things to the next level with Ravi. He’s been in love with her for so long, and she’s only viewed him as a friend. We think there is a good chance she still only views him as a friend, but perhaps this will change her mind about him. He wants to be with her, and he will be good to her. She’s someone who needs some love that’s good and great and kind, and she might find it with him if she can only open herself up to it.

We don’t know that she will, though. She’s not the kind of woman who can handle something that’s uncomplicated. She needs all of the complications that life has in store for her. She’s someone who has to have all the things in life working in her favor, and she likes men who just aren’t good for her. Or will having her mom back in her life now show her a thing or two about men who just aren’t good for her? She can move on, and that might be nice if she’s able to do that with a little grace.

All we know is she and Ravi make such a good couple, and they are finally spending time alone in the cabin. She won’t hate her time with him, but we aren’t sure she will want to spend more of it with him. Will this work?