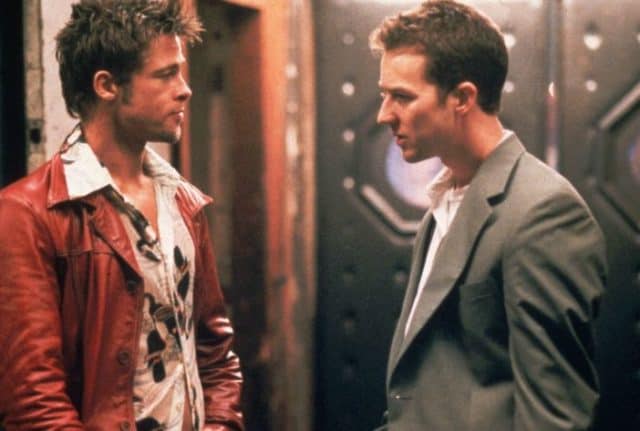 Fight Club was a very confusing movie from beginning to end. In fact it’s easy to tell people to watch it twice just so they’re aware of what’s going on finally. There are a few holes and some inconsistencies throughout the movie but the one thing that anyone has to remember is that the narrator is for the most part insane and that should be a giant gimme for anyone watching. In a mind that’s running away from itself to save whatever’s left of it there are bound to be more than a few slips that will be unaccounted for. The one thing that’s hard to miss however is the view of masculinity in the film and how it’s viewed from at least one very obvious angle. Men are essentially different in this film and there is a huge reason why.

Back in the day being a man meant you were supposed to dominate in some way, be it a quiet confidence or a brash and loud manner that didn’t take into account what other people thought. Those days slowly but surely gave way to what we know now and did during the filming of this movie. A man’s role was no longer to solely dominate everything around him through force or aggression of any sort, but to understand and reason his way through life by become a spectator of sorts. It was no longer allowable to take what was wanted or needed, measures had to be taken instead to find a peaceful resolution that could benefit both parties. There’s not a lot of negative in this model but it seems to have stripped some of the masculinity from the male gender.

Fight Club indicates that men are no longer men when they are forced to be spectators to their own lives by the will of society. What’s inherently wrong with this is that men, through many upon many generations of genetics passed down from father to son and so on have created a genetic blueprint that seems to say that men are more likely to be aggressive than reasonable most times. This means that forcing men to stand aside as spectators to the world they live in is akin to binding an angry lion that smells blood and wants a taste. That inner savage wants so bad to push forward and make its masculinity known but it’s also known what will happen if such a thing is unleashed.

Today’s society tends to impose rules that don’t seem to make a lot of sense at times, but do in fact make violence completely unacceptable unless it’s in a sanctioned bout and is endorsed by those that are in it for the money and little else. The idea of men being men, meaning being aggressive in any way, has become abhorrent to society since it indicates a general breakdown of order and a casual disregard for the law.

Fight Club was meant to entertain and to open the eyes of those that watched. Unfortunately most people just think of it as odd movie and move on.