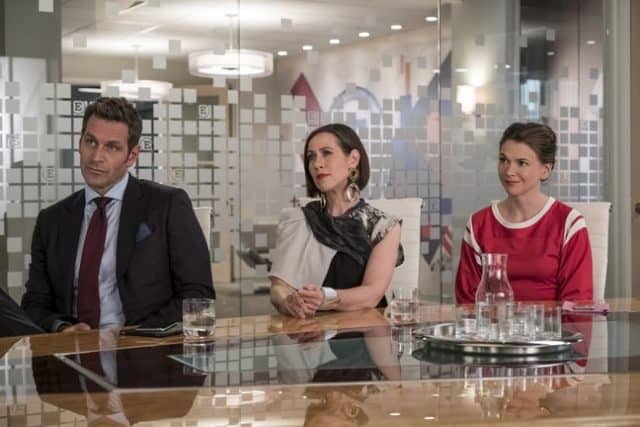 It’s the challenge that Younger posed in the beginning of the series: can women have it all? This week Kelsey seems poised to achieve that in the most unexpected way, while Liza rebuilds with clearer goals. Everyone wants happiness in their work and personal lives, never settling for less; at least that’s how it starts out. We saw how high hopes led to the end of Liza and Josh’s relationship, so at the very least everyone needs to keep some realistic expectations. Does that mean that we stop looking for the happy ending?

Remember when Kelsey’s biggest romantic drama was the Greek tragedy that was Thad? That was bad, but mixing romance with the workplace competition is a huge negative too. Which is really sad considering what a catch Zane is. The man is exceptionally charming, treats Kelsey well, and is attracted to her because she is a successful woman. It is with great agony in her soul that Kelsey soldiers on to poach one of Zane’s clients. Then a miracle occurs-Zane isn’t upset! He’s more attracted to Kelsey, and it seems that he was thinking about dropping his writer anyways. Perhaps Kelsey can have her cake and eat it too.

Josh should have run away screaming when Montana neglected to tell him they were driving to her parent’s home for the day. The absurdities of her lying about her real name and her “appropriation” of other artists’s work amps up the level of ironic inappropriateness. Finding out that Montana stole from Maggie and is trying to pass it off as her own is just unacceptable. Josh may want to make a clean break from Liza’s whole world, but Maggie is his friend too. To say that Maggie is angry at Montana would be an understatement. The little tart needs to be taught a lesson, which Maggie is only too happy to teach her by way of a switchblade to an art piece. She gets her revenge on Montana and gets an article written about herself that puts her artwork back on New York’s radar. It all forces the Liza and Josh confrontation that we’ve been waiting for. Liza did the parent thing, and now she’s done. It doesn’t mean she doesn’t want Josh in her life, maybe be the cool aunt to his kids one day (one day far, far down the road).

Stepping up to the plate as the associate editor of Millennial, Liza sets out to find a new romance writer to write under Empirical’s go-to pen name for great romance novels. Thus she consults the all-knowing Redmond, who pulls a rabbit out of his hat for his friends yet again. His pick for Liza is an English professor at Columbia University who would write under a pseudonym in order to put her 4 kids through college and still be eligible to make tenure (discuss double-standards and gender stereotypes among yourselves). The catch is that the woman wants to write romance books with happily ever afters. The only time readers are okay with that is if the book is apart of a series. Eventually Liza realizes that, right after Charles does. Just because happy endings are few and far-between, doesn’t mean there’s anything wrong with trying to find them.

Who’s got the best shot at a happy ending at this point?

Younger Season 4 Episode 5 Review: "The Gift of the Maggie"

Liza and Josh finally have their post-breakup confrontation in this week’s Younger.