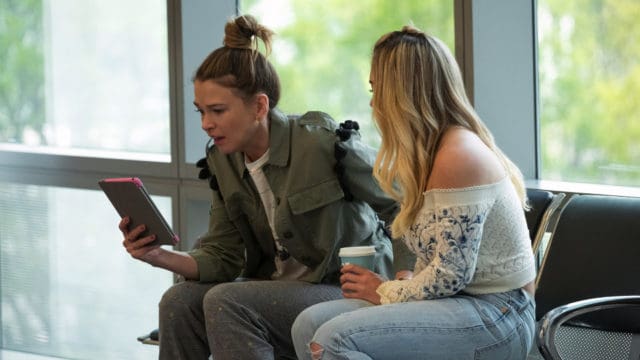 You know how they say things have to get worse before they get better? That definitely applies to Kelsey and Liza’s strained friendship in the beginning Season 4 of Younger. They’ve been besties from Liza’s first day at Empirical, but the truth has not set either one of them free. Kelsey’s anger and Liza’s silent acceptance of it all come to a head in this episode. How do you bring together two friends for theÂ dÃ©tente they so desperately need? Into the Woods we go!

If you want evidence of Kelsey’s ire, witness how it is affecting her judgment in the workplace. Charles thinks it’s time that Liza was given more responsibility with Millennial, but Kelsey’s not having any of that. It’s up to Diana to be on Liza’s side…when she’s not stalking her boyfriend’s ex-wife. I doubt anyone could stop Diana from diving headfirst into a sticky situation, but of all the reactions she envisioned from her beau’s ex, hyena laughter was definitely not one of them. In a later, less hysterical moment, Richard’s ex-wife Winnie explains that Richard left her to go chasing after models. You can see how this would be disarming to Diana, but Richard shuts down that down immediately by telling his girl he is with her because she is beautiful inside and out. I hope he’s being sincere because Diana deserves some happiness.

While Kelsey is gone, her new roommate is enjoying his Liza free life. At least he is until Maggie tracks him down to return his things from Liza’s place. I really hope Josh and Maggie remain friends, because that is a very underrated friendship. It’s through Maggie that Josh meets his rebound, her assistant Montana. Everybody needs a rebound-as long as that’s all it is. Montana may be a fan of Maggie’s art, but something about the girl makes me think Josh can do better.

As I said, nothing says tension like being stuck in the woods together. Millennial gets invited to Bonfire, an invite-only weekend for the best publishing houses to network. Â In other words, glamping with no wifi. The trip is a huge success for Millennial, but Kelsey’s anger pushes Liza to seriously consider an offer to run her own imprint at another publishing house. Suffice it to say, Liza and Kelsey are as far apart as they have ever been.

Once they get proper cell service, that’s when things change. Liza picked the worst 24 hours to be out of range because Caitlin had an emergency appendicitis that nearly burst (basically means poison is leaking into your body from the inside out-fun times). All Liza can do is panic in the airport while waiting for her daughter to get out of surgery, and Kelsey is there for her every step of the way. Seeing this side of her friend is a huge breakthrough for Kelsey. She now understands exactly why Liza’s lies started in the first place, given that Caitlin didn’t go to the doctor at first because she was afraid of burdening her mother with the hospital bill if it wasn’t serious. Not only does Kelsey forgive Liza, she goes to Charles singing her praises, and even requests that Charles give Liza a raise. That’s true friendship.

Now that things are out in the open, where to Liza and Kelsey go from here?