Home
Younger
Younger Review: How Liza and Kelsey (Sort of) Got Their Groove Back 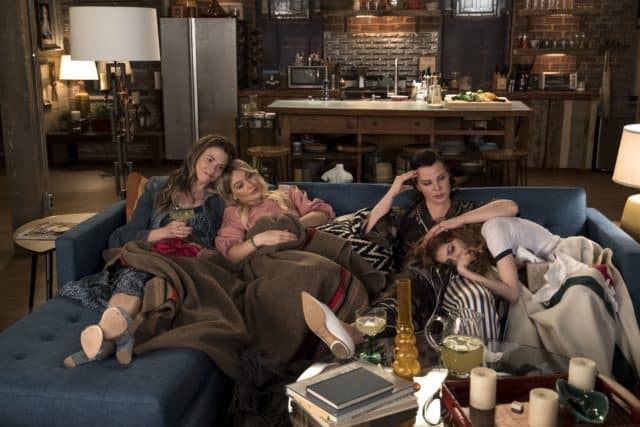 It’s a longstanding rule that friends are extremely important when dating. If you didn’t know it before, the last shot of this week’s Younger should give you a clearer picture. Both Liza and Kelsey are coming out of relationships that ended badly. With their friendship renewed, it seems like the perfect time to get back on the horse, but they both learn just how much more complicated that can be.

Liza’s promotion to associate editor of Millennial doesn’t get off to a great start. Though she’s happy to remain Diana’s assistant since they can’t afford to hire a new one, her hopeful first outing in her new job doesn’t end well. While wining and dining with Empirical’s longest-running author, the old woman dies on the toilet. That’s how Catherine the Great went, so I suppose it’s appropriate for the woman Empirical considered their queen of authors?

The funeral is a who’s who in publishing covered in so much pink you’d think it was a country fair of cotton candy instead of a funeral! With Empirical facing a big loss in their market, Kelsey attempts to poach an adventure novelist from a rival publishing house. Not so fast, says Zane Anders (The Originals‘ Charles Michael Davis), said author’s editor. Zane is not in the business of losing authors, and persuades Kelsey that the only chance she has is with himself. To be fair, look at him! Secondly, the man has charisma and a fantastic wardrobe (for which his publishing house provides a budget). This guy seems like a great prospect for Kelsey, until she gets a text from his author saying he’s still interested in jumping ship. Nothing kills a romance faster than professional rivalry. It may seem cute at first, but it never ends well.

Liza has an even worse time of it, if you can believe it after everything she’s been through. It’s not as if Liza’s looking for anything serious, more “birthday cake”, as Kelsey put it. Picking up a guy at a bar doesn’t work out as well this time around for Liza. The last time she got Josh, while this time she ends up with a ‘happily’ married man who thinks working in the city gives him a pass to cheat on his wife whenever he wants.

Which is how we get to the final scene of the night: Kelsey, Liza, Lauren (who is heartbroken after she and Max split when he discovers she has been rating him), and Maggie all curled on the couch. Misery loves company, and girls need their friends when they are miserable. The warm hugs and margaritas certainly don’t hurt.

Was there enough girl power and pink to take us back to the lessons of our teen years?

Liza and Kelsey value buds over studs after unfortunate experiences reentering the dating pool on this week’s Younger.