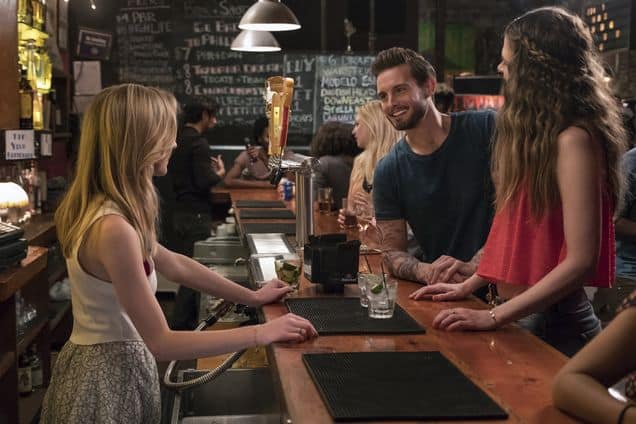 What do chickens, Irish bartenders, ex-wives, and lazy college kids have in common? They all just invaded Younger, and only one of them was gone by the end of the episode. In everything that happened this week, the running thread was small annoyances which blew up into life-sized, long-term problems. Since getting rid of the eggs you hate was as simple as getting rid of the chickens in this episode, it’s easy to see why things are about to get very complicated.

Diana has been happily drama free blissfully co-habitating with Richard. It’s the happiest she’s been in years, which means a wrench just had to be thrown into the works. That wrench is none other than Richard’s son, who decides he’d rather sleep/desecrate Diana’s couch rather than finish his last semester in college. Diana and Richard have had the greatest relationship, but expecting such a driven woman to be okay with her boyfriend’s son going through a lazy crisis on her couch is not realistic.

It’s safe to say that Kelsey and Josh do not have a good track record picking their own partners. Luckily when you have really good friends, they know you better than you know yourself. Kelsey and Josh decide to pick each other’s potential dates. Upset after being tricked into paying for a $500, Liza and Maggie end up at the same bar as their friends, and it is Liza who finds Josh’s next partner. Claire is a sweet as can be Irish bartender who is also an intern at a video game design company. She is an exceptionally cool girl. Dare I say it, but Liza might have just set Josh up with his perfect girl.

Charles’s ex-wife Pauline is back in the picture, and she wants to stay. She came back to New York with a purpose, to get all aspects of her life back. She would love for Millennial to publish her book, but she also wants her family back. Charles doesn’t have to explain marriage to Liza, she’s been through it. Liza understands why Charles needed to hash things out with Pauline. Liza also agrees to publish and edit Pauline’s book. I echo Maggie’s confusion: “You’re helping both of the men in your life get with other women?” Yet Charles makes it clear that he is not interested in getting back together with his ex. He wants to see where he and Liza can go.

Are Liza and Charles headed for disaster?

Younger Season 4 Episode 8 Review: "The Gelato and the Pube"

Younger welcomes a few new additions, only a few of whom are actually welcome.