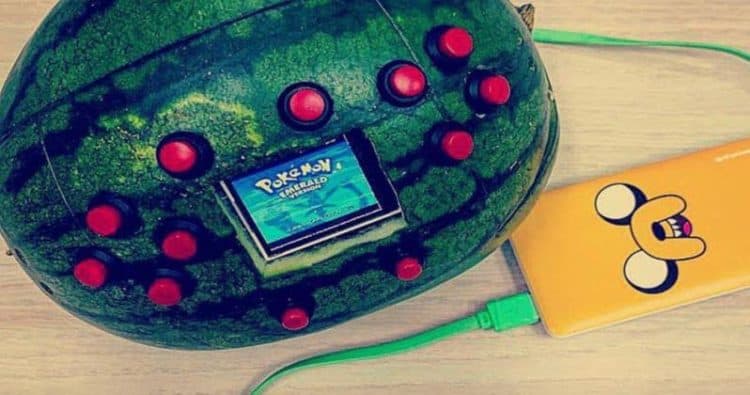 There are definitely times when it would appear that people are bored and need something to do, but then again, boredom does sometimes inspire people to do things that are fairly amazing. As far as the technical details it’s definitely required that a person knows what they’re doing in order to make this aspect work, but if there’s a way around it then good luck to you. Otherwise, this is quite impressive and shows that this young man does have some skill has been planning this for a while. Cutting up a watermelon to create a working Gameboy sounds like a very interesting idea and to be fair there’s likely a way to do this that would allow the melon to last for a bit longer and possibly keep it from doing what all organic matter does, which is rot. As a rudimentary idea, this is definitely innovative and something that could be replicated by using something that resembles a watermelon but is actually a plastic replica, as like it or not the melon is going to rot eventually, even with plastic wrap. The fact is that everything that’s organic does eventually break down, so it might last for a while and it might even be possible to use something to keep the watermelon from rotting too fast, but one way or another, that melon is going to degrade and eventually mess up the electronics on the inside or make it very difficult to keep playing.

Think about a player that loves to mash the buttons as well, since when it’s whole, a watermelon is pretty tough to damage. But when it’s been hollowed out and cut apart in various ways the integrity of the rind is compromised and if someone were to mash the buttons a little too hard it’s fair to say that their thumb would be going right through the rind and the game would be ruined. Don’t get the wrong idea, this is an interesting development and it’s something that the creator should be proud of since it’s pretty interesting and shows that a great deal of thought and effort went into this. But maybe it could be the start of something that might take off if he really tried to market it, such as a Gameboy or something similar, a portable game system, that could be handheld and be big enough, but light enough, to carry several games at the same time within a special compartment beneath or behind the console. Think about, a shell that could hold the game system and several games so that a person didn’t need to keep a separate game case nearby at all times if they wanted to take it with them. That way they could change out the game whenever they wanted and keep the games close at hand when it was time to switch. It’s an idea that’s not completely formed but it’s one that popped into mind and might have already been accomplished for all I know.

But this is an interesting concept and something that could probably take off if the design was shown to those that might be interested. Just think of how many different designs could be derived from this and how popular it might be among gamers. Obviously the weight of it might be an issue, but there are definitely ways around this, and if the guy could come up with something like this it feels safe to say that someone else could come up with an idea of how to distribute the weight evenly and create a working console that could possibly be an innovative way to carry around a portable system. How many people remember having a Gameboy or the Sega handheld console and needing to have another container for your games nearby? Trying to eliminate that by being able to load four or five game cartridges into a specialized slot in the shell holding the game would be kind of cool. For game consoles that still take chips or cartridges, this would be a cool idea, but then again, a lot of games are downloaded as apps these days so this is probably some old-school type thinking, which is still great since if anyone’s been looking there are still plenty of people that happen to enjoy the old-school type gaming.

Whether it was boredom or just the need to create something that inspired this idea, it’s something that does have a lot of merit and could warrant more attention, but sadly the melon would kind of need to go by the wayside since the novelty of it is great and the idea to make something out of a piece of produce is highly interesting. But once that expiration date hits it’s going to be utterly useless since a lot of people probably wouldn’t want to feel their fingers squishing into a rotten game console.