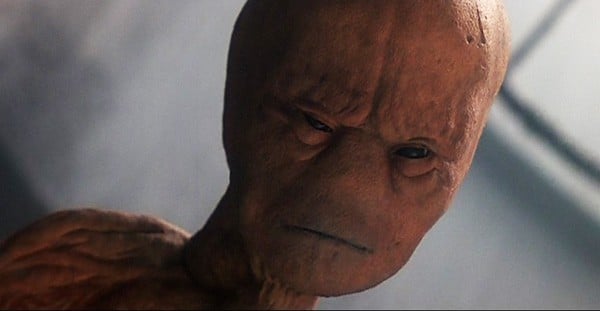 In 1975 it’s been said that logger Travis Walton and his co-workers experienced an alien phenomenon that left Walters missing for a period of time after he was struck by a light that seemed to blaze from the sky. Fire in the Sky is an accounting of what Walters went through during that time and the tumult this caused with his co-workers. Of course those in town though they were cracked, UFO sightings and the like are usually debunked on a regular basis. The problem was that they thought that Walters had been killed and the group of guys were making up a story to explain what had happened to him. When no evidence of foul play was discovered however and their lie detector tests came back negative it was deemed a bit of a mystery.

It would seem that as advanced as they are aliens still haven’t figured us out all the way.

10. The real Travis Walton makes a cameo in the movie.

His wife is in the cameo as well. If there was ever any doubt that he was making it up the act of trying to gain attention for the abduction would support it.

9. The blazing light was not a part of Walton’s account.

Apparently all he remembers is being knocked out and then waking up on the alien ship.

8. Walton managed to describe the aliens pretty convincingly to whoever would listen.

It’s easy to doubt but it’s also very hard to give the benefit of the doubt to someone that describes an encounter in ways that are not entirely imaginative as they relate to pop culture and what it’s shown of aliens thus far.

7. There were seven men in the vehicle.

The movie pared it down to six so there wouldn’t be too many faces and names that needed to be remembered by the audience.

6. Rumor has it that there’s a remake underway.

It’s a rumor at this point but it could be happening since Travis Walton seems to want in on it.

5. It’s been surmised that Walton used another UFO-based show to come up with his own story.

The UFO Incident came out two weeks before his release so it’s possible that after his disappearance, which is still hard to explain, that he used this movie to come up with his descriptions.

4. Robert Patrick and Peter Berg starred together in Cop Land.

They both played cops obviously and were about as crooked as the letter S.

3. It came out to mixed reviews.

Some people were excited to see it come out while others just shook their head and wondered why anyone even bothered. It ended on an odd note and didn’t really go into a lot of detail.

It made back more than it used for its budget but not much. The box office numbers weren’t that great as expectations were a lot higher.

1. Walton made a claim that he flew the ship in an effort to escape.

If you wanted another reason to roll your eyes, here you go.

The movie wasn’t horrible but it did leave people wanting a better explanation.