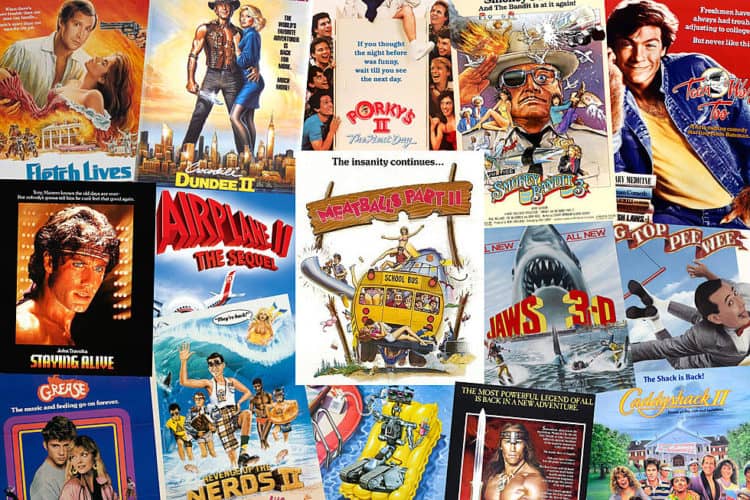 We already know about some of the greatest lines of the 80s since they’re repeated over and over. A lot of great lines go underappreciated however even if you do hear them from time to time. In a big way it all depends on which movies a person really pays attention to and how great some of the lines really were. A lot of us might have friends that will speak a line from a movie and it makes us roll with laughter or play along and speak the next line verbatim. The point is that a lot of movies have a lot of great lines and to be fair and realistic every line hits many people differently, whether it be something humorous or something that hits you right in the feels.

With that being said, here are a few lines that you might remember but don’t always get the attention they deserve.

This line might actually be seen as problematic to some people but it was pretty funny to a lot of folks since Ty Webb was speaking to Danny in a comfortable and very loose way about life and, well, some of the darndest things came up during the conversation. There was also the mention of Ty’s lumber mills, even if he didn’t know just where they were.

9. “My name is Darth Vader. I come from the planet Vulcan!” – Back to the Future

Some folks might want to say that this shouldn’t have been possible but upon thinking about when Star Trek and then Star Wars came out it was entirely possible since Marty was back in the 50s, before either franchise had even been created. Plus, Van Halen might have actually been considered ‘brain-melting’ at that point since nothing that wild would have been invented yet, and rock and roll was still in its childhood so to speak.

8. “No, we’re exterminators. Somebody saw a cockroach up on 12.” – Ghostbusters

Everyone wants to go to the big lines in this movie since they’re fun and they get a lot of laughs, but it’s the underrated scenes that make you chuckle that are really good for a pleasing memory. When asked if they were cosmonauts, Peter Venkman chuckles and delivers this line. When the other man responds with “Must be some cockroach,” Peter just comes back with “It’ll bite your head off man.”. Now tell me, how smooth is that?

7. “Always separate the drugs.” – The Goonies

Mouth was by far one of the funniest characters in this movie since there were only a couple of times when he really shut up and most of the time when he was talking he was hilarious. When Mrs. Walsh asked him to translate to Rosalita what she wanted done in the house it was obviously a bad idea. But since Mrs. Walsh was just as scatterbrained as her husband she trusted Mouth, who went on to tell Rosalita just which drawers which drugs went into. Oh and of course he had to tell her about the ‘sexual torture devices’ in the attic.

This is actually the lead-in to one of the greatest speeches in Rambo, but it’s iconic all the same since it’s been repeated over and over as kind of a joke throughout the years. When you look at it seriously it’s not as funny since Rambo had serious PTSD and was messed up in a way that a lot of us can’t relate to. But the war he brought in response to being pushed so hard was nothing less than epic since to be fair he went a little overboard, but the sheriff definitely egged him on.

5. “In Okinawa, belt mean no need rope to hold up pants.” – The Karate Kid

Isn’t this one of the biggest reasons we all loved Mr. Miyagi? He knew how to fight, he knew when to fight, and he knew the value of a belt. Not to knock or devalue anyone’s belt when it comes to martial arts, but realistically a belt is to hold up your pants, and the color only signifies how much hard work and effort a person has put into learning the movements. True, fighting skill is not to be undervalued, but a belt is a belt, it has a pretty standard function.

4. “Strange things are afoot at the Circle K.” – Bill and Ted’s Excellent Adventure

This is definitely appropriate with Bill & Ted Face the Music coming soon, since the line kind of encompasses the movie at that point and Bill and Ted’s ability to comprehend just what’s going on. It should be said that the two aren’t universally stupid, but are definitely ignorant and less than attentive at times until it’s time to finally stop being a couple of morons and get down to it.

3. “Nobody puts Baby in the corner.” – Dirty Dancing

Now this is truly an iconic line that does get used but gets tossed to the side after each use all the same. Baby and Johnny were great characters that might never come again since Swayze and Grey played them so well that anyone even trying to one-up them kind of deserves the criticism they’ll get.

2. “Can you summon demons, wizard?” – Conan the Barbarian

What? Did you think I was going to go into the riddle of steel? Or maybe something with Crom in it? Nope, not this time. The meeting between Conan and Akiro was just too great to pass up since the diminutive wizard and the hulking barbarian were a pair that didn’t feel bound to get along in a lot of ways, and yet they managed to become great companions.

1. “I’m not Captain Walker. I’m the guy that keeps Mr. Dead in his pocket.” – Mad Max Beyond Thunderdome

Something about this scene and the quote just resonates in a way that goes beyond even ‘two men enter, one man leaves’. This kind of says that Max is NOT the man to be messed with.

Any other lines you can think of?