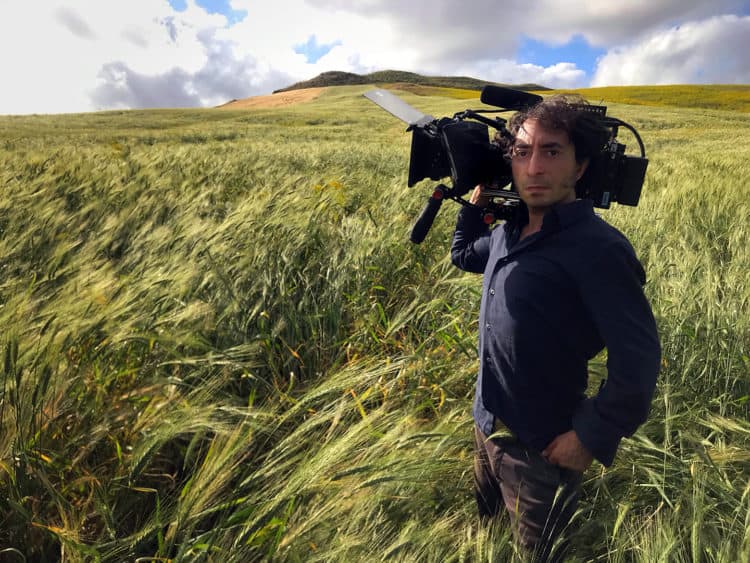 Bret Easton Ellis is the writer behind hit films such as American Psycho and The Rules of Attraction. His most recent project is the horror/thriller Smiley Face Killers starring Crispin Glover. To get some insight about how the film was made, we spoke with the film’s cinematographer Michael Marius Pessah. Below we asked him ten questions about everything from working with director Tim Hunter, to his 2019 Super Bowl commercial.

-Tim Hunter directed Smiley Face Killers. He has worked on everything from Twin Peaks to Falcon Crest. Were you familiar with his work before this film?

As you can imagine, I was a huge fan of Tim Hunter’s work: River’s Edge, Over the Edge and his episodes of Twin Peaks I saw at a time when I was discovering the power of cinema and made a real impact on me.   It was such an honor to collaborate with him on SFK.

-If so, do you have a favorite project of his?

River’s Edge is a classic, iconic film that have the power and economy of great Chekov short story.    I think it really changed the way ‘teen’ movies could be approached.

-How would you say your work differs on a horror film, opposed to a family drama like Saving Flora?

Of course, it’s all storytelling.   Each film asks for you to get under the skin of the script, to understand the director’s intent and think about who the actors are and the world you’d like to create.   That said, what I think makes filming a horror movie so fun and challenging is that you are making your work for an ‘expert audience.’   Horror fans see tons of horror movies, both new and old, and they expect you to be in a conversation with the history of the genre and to do something novel and innovative.     There’s an arc from Nosferatu to Psycho to Don’t Look Now to Halloween to Scream to Get Out to whatever it is you are trying to do in the idiom, and you need to be aware of your place in it.

-Are there specific cinematography techniques that you find yourself using regularly?

I think it’s really nice to have an actor walk themselves into a closeup instead of dollying in.   Spielberg does this all the time and it works so well.   I think some cinematographers over-rely on soft lighting – it is now so easy to do with the new technology.    However, when you use harder light the actor’s movement becomes more expressive – you can feel the change of light on their face as they shift their weight or move across the room.    Finally, one thing I learned from the great Roger Deacons is that light should always have some type of texture or struggle to it, so it’s nice to put little pieces of gel or greenery or anything in play to complicate the light-source a bit.

-What were some of the challenges, individual or collaborative, you encountered working on Smiley Face Killers?

We had some very big setups at night and Tim likes to have the ability to improvise with the camera and the actors – he really gets great performances with that flexibility.   That led to me needing to design lighting setups that had room for the camera and actors to roam a bit.    There was a lot of cleverness the crew devised for hiding lights in all sorts of places, big and small.

-When you begin a new production, like Smiley Face Killers, what is one of the first things you do?

Memorize the script.  It’s really one of the most important things you can do and it helps you every minute on set.

Then talk to the director.   Really listen to what her or his intent is for the movie.  Then I schedule some movie nights where we each bring films for us to watch as reference.   If possible, I’ll try to book a theater where we can watch movies together on the big screen.  There’s something special about that experience.

-You filmed a sizzle reel for Smiley Face Killers long before production started, can you talk about what was in that sizzle?

It was a few scenes from an early draft of the script.  We filmed it to convey the look and feel of the movie, and it was a great way for Bret Easton Ellis, Tim Hunter, producer Braxton Pope and I to work on the tone of the film before taking on the whole movie.   They were simple scenes. A character looking at a map, the killer hiding in an apartment, some beach scenes.  Some of the footage from that first beach shoot is in the release of our movie.

-How was your work different in the sizzle, then in the final product?

The overall mood of the final was pretty close to our original intent.   The biggest difference is the scale of the production, and we had a different cast.   Ronen Rubinstein, Crispen Glover and Mia Serafino are great in the film, and you will adjust your lighting to accommodate the energy of different performers.

-You are known for using a bold use of light and imagery that merges an avant-garde sensibility with classic visual storytelling. How did you initially come stumble upon this style?

I grew up near a branch of the New York Public library and in the basement were VHS cassettes of tons of classic films.  I spent a lot of time watching these movies as a kid (free rentals!) and then seeing films at great archival theaters like the Film Forum when I was a little bit older.   I discovered Hawks, Hitchcock, Bergman, Minelli, Welles, Kurosawa, and Coppola there.   As an undergrad I went to Hampshire College, where I was immersed in avant-garde cinema while studying with professor Abraham Ravett – there my mind was opened to films by Maya Deren, Bruce Connor, Barbara Hammer, Stan Brakhage and many others.   Later when I began working as a cinematographer, and during my time at the AFI Conservatory I aimed to find a way to make these two sensibilities ‘rhyme.’  It’s an ongoing adventure.

-Your spot for TCL with Giannis Antetokounmpo aired during the 2019 Super Bowl. What’s it like to have a commercial in the Super Bowl? You can’t get much bigger than that.

It was fantastic, especially because I am very proud of the spot.   The director, Matthew Mishory, is someone who I’ve worked with for many years and has been wonderful creative partner on many films.  We filmed on the Phantom camera at 1000 fps, which required a huge amount of light on the basketball court.   There was very limited time with Giannis, so we worked out the shots with a stand-in, who was also a professional basketball player.   However, when Giannis came to set, he could jump about a foot higher and was way faster than even our 7’ stand-in.  We needed to quickly adjust our shots to accommodate the greatest athlete I’ve ever seen.   Being able to be on the court with Giannis and have him dunk a few feet away from me was one of the moments where it’s a reminder that I’ve got the best job in the world.   I’m able to get up close to amazing people and events in a way that almost no one else can experience and hope to convey some of that glory to the rest of the world.    Lucky me.

You can learn more about Michael Pessah, ASC here.