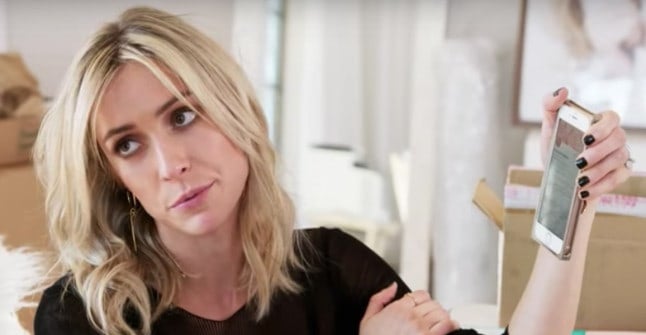 Calling for, or wishing for, the cancellation of a TV show is never a nice thing to do and I can imagine if anyone reads this that happens to like Very Cavallari has anything to say that they’ll let it be known in due course. But with that being said I will say this, reality TV has gone down the tubes in a big way. Why? Look at the things we’re willing to watch simply because the networks know they have us hooked. Look at the stuff they continue to push because they know we like the drama and will come back for each and every episode just so we have something to talk about at the office on Monday morning. So many people would gladly fight to keep reality TV on the air because they’ve forgotten what it was like without it blasting over the airwaves so consistently. Maybe Very Cavallari needs to be part of the #Realitybyebye movement. Hey, maybe we can get that to work.

Here are a few reasons why the show simply needs to go.

10. It would be better as a YouTube series, if anything.

It’s another reality show about a celebrity opening up their own store, it’s not exactly groundbreaking or original and as a series it seems to take up too much time and effort and could be relocated to YouTube where the overhead would a lot less and the space it takes up would be just enough.

9. Kristin isn’t the star of the show to be honest, Jay is.

There’s two things you might not want to mention on this show if you want to work on it and that’s, Laguna Beach, and the NFL. Well, it might not matter if you mention the NFL since it might actually get ignored, kind of like Jay Cutler did for a while before his retirement.

8. Jay Cutler came up with the name for her business.

There seems to be a trend starting here that Jay has a lot more to do with her show than Kristin does, almost as if she’s delegating herself right out of the picture at times. That’s not the case of course since it can’t be allowed, but it does feel that way.

7. Kristin doesn’t really seem to get into her own show.

She definitely takes a more Vanderpump Rules approach and stays out of the biggest bits of drama sometimes and that might be wise but it does make it seem that she’s not quite as involved.

6. Reality TV has already taken a nosedive, this is just one more inch in the dirt.

If no one saw this coming from the earliest days of The Real World on MTV, you know, when they still played music, then it was likely that they’d already been sucked into the whole idea that reality TV was the future of the industry. At that point righting the ship was kind of already a no-go.

5. It’s a show you have to be turned on to in the first place to even know about.

If you have no idea about this show (hand raised) and had to look it up then it’s a good sign that it wasn’t making that much noise in every area in the first place. That being said, a show that doesn’t warrant that much attention is kind of a non-starter in the entertainment industry and needs to be reworked, redone, or just recycled and move on.

In all honesty, this is about as truthful as it gets since he’s the star here and no matter how many times you might think it’s not true he’s the one with the biggest celebrity status. Who would have thought that Jay Cutler would have reached that pinnacle at some point?

3. This almost feels like it could be reduced to a blurb with some funny edits added in.

It’s a show about a woman running her household and her own business and trying to juggle it all. Where have we seen this play out before besides in a dozen other different shows? At this point it’s just overdone.

2. The quality of TV that people are willing to accept is becoming a bit ridiculous.

So many people defend reality TV as quality programming these days that it’s tough not to see the glazed look that comes to their eyes when they speak the praises of so many different shows, like this one, that don’t offer much of any value other than taking up a bit of their day.

1. It seems to indicate that upon retirement that sports stars are now going to be angling for their own TV shows, in some way.

Seriously, some sports stars seem to be holding onto their elite status as much as they can even when they step away from the sport.

Yes it’s easy to criticize, but take some of it as satire and you’ll see just how funny it really is.