Home
Movies
10 Things You Didn’t Know about “The Abyss” 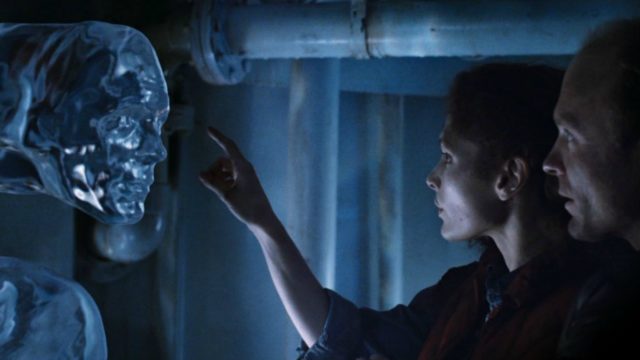 The Abyss was definitely a very odd and sometimes very telling film when it came to the paranoia of humanity versus the wonder of which some people are still capable of. Centered around the recovery of a missile warhead from a downed submarine. It plays out in the formula of an angry and ignorant military presence that wants nothing more than to do his duty and disregard everything, and everyone, else in the pursuit of getting the job done. What no one realizes is that the strange entity that’s been seen circling about has been watching and attempting to get to know something about their human visitors.

Apparently it wasn’t as fun of a film to shoot as it was to watch.

10. Every cast member had to become a certified diver for the shoot.

A great deal of this movie took place underwater so there couldn’t be any mistakes made thanks to inexperience. Everyone had to know what they were doing.

At one point he’d signaled for someone to bring him some oxygen since he was out but the person that finally brought it to him handed the regulator upside down. Water filled his throat before another person could set it right. Harris apparently broken down after this.

8. Â The resuscitation scene was a little too real for comfort.

Apparently Harris was really pounding on Mastrantonio’s chest and got a little carried away. When she found out the camera broke halfway through the scene she wasn’t too happy.

The only reason that the scene pulled away from this so quickly was that no one wanted to show the rats defecating all over.

6. A lot of the cast members don’t want to talk about their experience in this film.

If asked, most cast members wouldn’t bother to say much more than that their experience was horrendous. Ed Harris even went so far as to punch James Cameron in the face when he found out that Cameron had still been filming when Harris had been close to drowning.

5. The crew spent so much time underwater that they had to decompress a lot.

James Cameron would actually spend a lot of his time hanging upside down watching dailies through a window.

4. Catfish is using real bullets when he fires into the pool.

That ammunition was one hundred percent real and every precaution was taken to insure that no one got hurt.

3. Ed Harris and Michael Biehn would eventually star in The Rock together.

It’s interesting since Biehn is obviously the bad guy in this film while Harris is the good guy. Their roles get reversed in The Rock.

2. The scenes used with the water tentacle was the same thing that would eventually be used in Terminator 2: Judgment Day.

This film allowed Industrial Light & Magic to flex their creative muscle a bit, and it was so impressive that Cameron decided to use it again.

1. A lot of the shooting was done in an underwater nuclear reactor.

The reactor was half-filled and the water was so chlorinated that the actors’ hair sometimes turned either green or white.

Just by reading these it didn’t sound like a great deal of fun was had making this film.