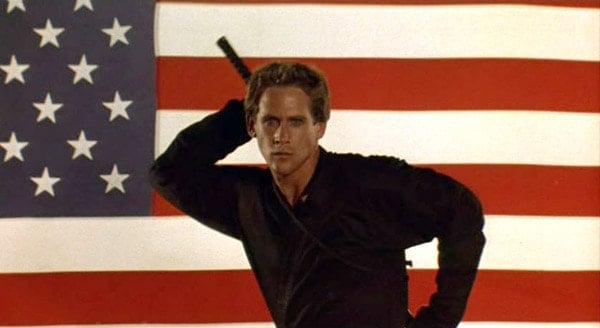 Anyone remember the mid-1980’s when American Ninja tried to take off and somehow became a cult classic? For the most part it’s about an American….who becomes a ninja….and then helps to take down a crime organization that’s stealing munitions from the Army, which this American Ninja is a part of. He takes his fair share of lumps and bruises but really he tends to do more damage than he takes because, well, he’s just that awesome I guess. To be honest it was kind of a hard movie to get into even for the 80’s.

But somehow it’s received a cult following all the same.

He came in knowing zilch about martial arts other than what people might know just from having watched a martial arts movie.

9. Steve James said Dudikoff was intimidated by him.

For a while James said that they had to film the martial arts scenes with him and Dudikoff being a good distance apart since Dudikoff didn’t want it to look as though he didn’t know what he was doing.Â  Eventually they reconciled this issue and the two men came to terms with each other.

It’s 114 to be honest and it seems a little excessive, almost as though they were going for quantity over quality. There’s a reason this movie isn’t that well known at this point.

7. Dudikoff got the part mostly for his looks.Â

The producers wanted someone that had the look of James Dean and the chip on his shoulder attitude. They didn’t care if he could throw a kick or a punch, they were just looking for the right face.

6. Steve James apparently wanted to change a lot of the dialogue.

It kind of sounds like it might have been a little too basic or not intelligent enough for him. A lot of actors don’t want to sound like they’re scared to talk unless it’s called for in the script.

5. Dudikoff contracted malaria during the shoot.

That’s why he’s sweating so hard at the end of each fight scene, he really wasn’t feeling well for a good portion of the movie.

4. Chuck Norris was the original choice for the lead role.

He didn’t want to have to cover up his face to play the part in a movie. Chuck has always preferred to be seen as himself in any movie he makes.

3. There were four sequels to this movie.

Yes, there was an American Ninja 2, 3, 4, and 5. The main actors starred in a few of them together but not all of them.

2. The original title was American Warrior.

It doesn’t have quite the same punch I suppose. American Warrior almost sounds like it could be anyone, while American Ninja sounds almost mysterious, as though it’s a contradiction of terms.

1. There’s a KISS poster in one scene of the movie but it had be covered up to avoid any legal issues.

The budget for this film wasn’t all that big and trying to get permission to show a band like kiss might not have been that easy.

For an 80’s movie it was about as good as it could get without having much of a budget.