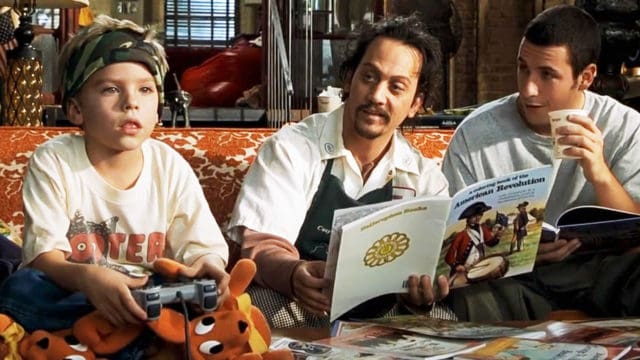 Big Daddy was where Adam Sandler’s comedy finally started coming out of the man-child phase it seemed. He’d already been doing a little more serious stuff at this point but this film really showed him growing up throughout its length as he had to take control of his own life in order to show young Julian how to behave in polite society and not be the smelly kid in class. When the kid was just dropped into his lap he didn’t know how to act or even how to get the kid to relax most times, but despite the fact that he fooled Child Services into letting him keep the kid Sonny finally did start doing the right thing. He taught Julian that bathing was important, that peeing outside was no longer acceptable, and that school wasn’t as boring as it’s made out to be. For a little while Julian resisted, but once he was given the right kind of initiative he became a much more reasonable child.  This movie does happen to advocate breaking a law to do the right thing, but ultimately it does show the change and development of a man that needed a reason to grow up.

Adam Sandler still hasn’t grown up all the way just yet, and hopefully he never will.

She was the waitress in the bar where Sonny takes Julian. She gave Julian a root beer.

The toy was based on a toy called Diving Dan that Sandler had as a kid.

8. Having Steve Buscemi do a cameo is a Sandler trademark.

If you notice he pops up in a lot of Adam Sandler’s movies and is almost always there and gone within a couple of minutes.

7. The twins that played Julian were losing their teeth and had to be fitted with fake teeth during the movie.

They lost their baby teeth while filming and the replacements kept falling out as well.

6. The twins didn’t actually urinate on anything.

The urination scenes were faked with hand pumps that were held and squeezed when the actors turned away from the camera.

5. This is Sandler’s most successful live-action movie.

It grossed a good deal less than Hotel Transylvania 2 but as far as live-action goes nothing has topped this movie yet.

4. The director had a cameo in the movie.

Dennis Dugan was the guy on the phone during Halloween that eventually gave Sonny the finger before drawing his blinds closed.

3. The film had a different working title.

It was originally titled Guy Gets Kid. You can see how the title they went with was better yeah? The other one just sounds creepy.

2. There were other actors considered for the role of Sonny.

Bill Murray and Jack Nicholson were considered for the part of Sonny. Personally I think Murray could have worked, but not as well.

1. The argument that the delivery guy was Sonny’s best friend is actually real.

Rob Schneider was playing the delivery man and in real life Schneider is Sandler’s best friend.

It was a very funny and heartfelt movie.