Home
Movies
10 Things You Didn’t Know about “The Machinist” 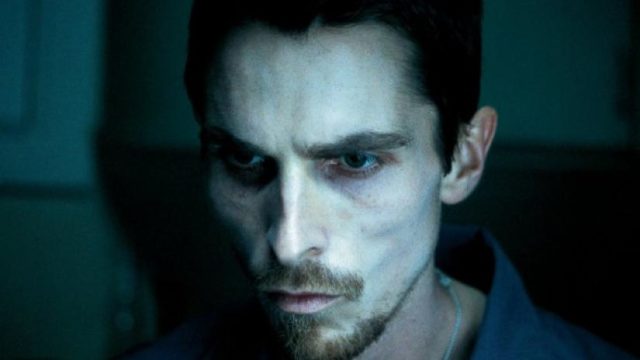 The Machinist was a movie steeped in what seemed like misery drowned in suspicion and liberally sprinkled with bouts of insanity. As the main character Christian Bale went above and beyond when it came to his character, losing so much weight that he was little more than skin and bones for his role. His dedication to the part was astounding but the movie itself was so disturbing that it left you feeling almost abused at the end for what you’d seen. In many ways it’s as though the director purposefully wanted you to strain yourself to see things from the distorted view of the main character, just so you could have the pleasure of going mad right along with him.

But here’s a few things you didn’t know about the movie.

10. Christian Bale lost over 60 pounds for this role.

In truth he lost 63 pounds total. He would have gone all the way down to 100 pounds but the producer and the director didn’t want him injuring himself. His daily diet was an apple and a can of tuna.

9. Bale couldn’t perform as well after the severe weight loss.

Eventually he found that running was more of a hassle than he had anticipated. His leg muscles just couldn’t handle the added strain.

8. Bale actually admits to enjoying the weight loss for a time.

It did help to cool him off and allowed him to enter a state of euphoria that helped him with his character. It was still a dangerous proposition however.

7. There is a scene in which two real life junkies can be seen shooting heroin.Â

These weren’t extras. When Trevor is driving Marie and Nicholas back home you can actually see these two in the background shooting up.

6. The entire film was shot in Barcelona, Spain.

The director and crew took great pains to make this part of Spain look like LA by adding in every Americanized piece and prop they could find to get the look right. They also went to the worst parts of Barcelona to make it happen.

5. The movie was considered too weird for many studios.

The director and producer just couldn’t get a lot of people to say yes to the script since many considered it to be too far out of their comfort zone.

4. A lot of producers loved the writing that made the screenplay, but not the subject.

The screenplay was great, but the subject was simply too dark for a lot of people to handle. It was beyond something that even Hitchcock would do.

3. There was very little CGI in the film.

In a very CGI-heavy culture this movie was extremely sparing with it. There are a couple of scenes here and there but nothing major.

2. Bale took up smoking to curb his appetite.

In order to keep himself from getting too hungry and breaking down Bale took up smoking to keep his appetite suppressed as much as possible.

1. There are a lot of references to classic tales and poems throughout the movie.Â

In many scenes there are a good number of references that go unnoticed and clues that are thrown out without being fully recognized.

It was a very disturbing movie, and not just because Bale looked like a walking skeleton.