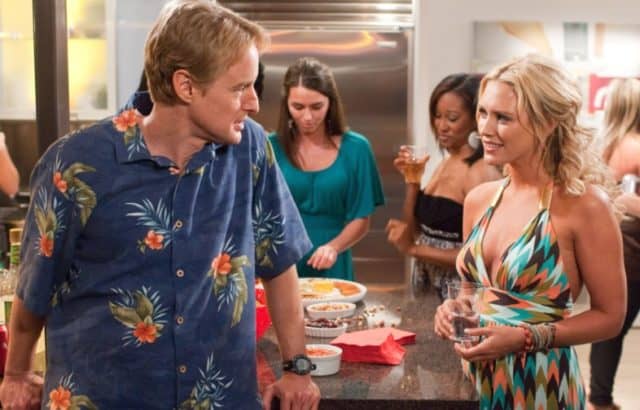 Hall Pass is almost the Owen Wilson equivalent of a family movie, or at least the next best thing. When two couples feel that their marriage is flagging because they’ve hit a dull spot in their relationship the wives give their husbands a hall pass, which is a week to do anything they want to do while the wives go off and do what they want. It soon enough becomes apparent that the men are no longer the studs they once pictured themselves as while the wives are able to attract men without much of an issue. So in other words a hall pass is in some ways used to remind a guy how lucky he is, and to liven things up just a bit.

It seems like a very odd idea for any couple but for some it might actually work.

10. It cost a lot of money to get the chimes from Law and Order for the film.

The chimes you hear announcing the different days cost about $200 thousand to use for the movie.

9. Amanda Bynes was the first choice for Paige.

She had scheduling issues however so Alexandria Daddario was brought in as the kids’ babysitter.

8. The fantasy at the end of the movie was Owen Wilson’s idea.Â

The rich couple that are shown in the first part of the movie think over the idea of a hall pass and you can see in the guy’s fantasies just what he envisions will happen.

He played the part of a bouncer that got in big trouble since he let the guys into a club when they were already drunk.

Evans is a former Boston Red Sox right fielder. The Farrelly brothers love to put former athletes into their films, particularly from Boston.

5. There’s a vague Dumb and Dumber reference in the movie.

4. The hairstyles used in the movie didn’t really match the era.

The hairstyles were more from the 1970’s while the film was set in the modern day. It seems like the method was used to make the leads seem a bit older.

3. Jason Sudeikis and Christina Applegate have both worked with Jennifer Aniston.

Sudeikis has worked with Aniston in four movies, one of the most notable being We’re The Millers, while Applegate has played the part of her sister on the show Friends.

2. The film’s title is an obvious reference to the privilege the guys’ wives give to them.Â

A hall pass is more or less permission from one’s spouse to go off and do whatever they want for a week. It’s a way to let off steam and let people get whatever they need to out of their system.

1. The film was a moderate success.

It was funny and it was enjoyable but more than anything it was just another comedy to enjoy, not a blockbuster.

The film certainly got a lot of married men thinking though.