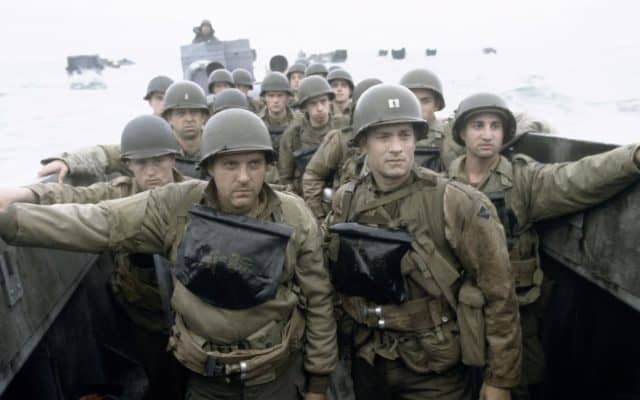 Saving Private Ryan was one of the most honest to real life films ever created and tugged at the emotions of many an individual. What you don’t know about the film though might surprise and even shock you just a bit. Unless you’re a hardcore film buff there are bound to be several facts within this article that you never knew about one of the greatest war movies ever made. World War II was a horrendous and life-altering conflict that reshaped history as we know it and affected the lives of millions upon millions of people that were involved in one way or another. The least Hollywood could do is create a film that was true to the source.

Here are ten things about Saving Private Ryan that you might not have known.

10. Many D-Day veterans could not bear to watch the opening scenes.

For those that were there and experienced the war the opening of the movie was simply too realistic and brought back a tide of memories that many could not bear. Despite this they claimed that this was the greatest depiction of realistic warfare on film.

9. Two of the landing crafts used in the film were actually used in real life combat.

Out of all the ships you see delivering the troops to the beach, two of them were in actual use during the war. This lends a bit more realism and authenticity to the movie that many other films just don’t have.

8. Every main actor except Matt Damon had to go through a grueling military training period for the film.

This was to build up the the attitude and feeling that they portrayed in the film. None of them wanted to go in to rescue one man, and that feeling was inspired largely by the fact that Matt Damon did not have to go through basic training. This made it much easier for the other actors to portray such resentment.

7. Tom Hanks was inducted as an honorary member of the US Rangers Hall of Fame.

At this point many of us already know that Tom Hanks is a legendary actor. But this type of honor from the US Army is largely unheard of and is without a doubt a higher honor than any award.

6. Matt Damon was cast because he fit the profile of an unknown, all-American actor.

The only unfortunate tripping point in this is that Damon won an Oscar for his appearance in Good Will Hunting before Saving Private Ryan was released. Thankfully it still didn’t affect the film that much.

The scene cost around $12 million and featured roughly 1,500 extras. It was lauded as one of the best battle scenes of all time.

4. There was no storyboard for the Omaha beach scene.

Spielberg went completely shot for shot with this scene to keep it spontaneous. It took nearly four weeks to finish.

Considering how violent it was the movie almost received the most restrictive rating in cinema to date. Spielberg wasn’t going to cut anything out however so eventually it was allowed to keep an R-rating as an exception.

2. It almost wasn’t allowed to be shown in India.

Spielberg was ready to not release the movie in India because of their demand to censor the film. But when the Home Minister of the country saw the film he changed his mind and ordered it to be allowed uncensored.

1. The spare ammunition was made of wood.

Do you recall the spare ammunition that was carried by the actors? It was all made of wood because metal was simply too heavy to carry for the scene.

It’s interesting what you find out about a film when you do some further research. Some of these facts might actually blow you away when you read them.