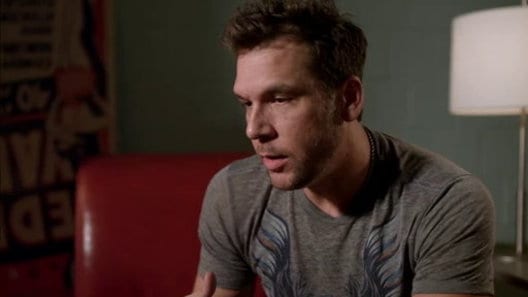 You either love him or don’t, but Dane Cook is one of the most outlandish and funny comedians in the world today for a number of reasons that are usually best given by his fans. He has a very up front and personal style of comedy that has made him popular with some folks and less than popular with others. It’s usually in the way that he delivers his jokes that makes people laugh or get angry since he tends to say what he wants and doesn’t worry too much about the reaction that comes afterward. As a comedian he’s one of those that gets on stage and isn’t about to pause in his set to really get into with someone unless he absolutely feels the need. As an actor though he’s a guy that’s worked with a few of the greatest names and has delivered some pretty memorable roles in his time on screen.

Here are a few things you might not have known about Dane.

10. He used to work at Video Horizons and a Burger King in the past.

Yep, he used to work at a video store and a fast food restaurant. You never can tell where great talent is going to come from since quite honestly it’s not always from those that have attended the upscale universities and passed their classes with flying colors.

Being from Massachusetts this isn’t too much of a surprise, and it’s definitely known to many that you don’t tend to diss someone’s team in that part of the country unless you’re trying to start something.

That kind of healthy living is great for a lot of people since it does afford a greater chance to stay healthy and fit. There’s no doubt that he’s done a bit of this in his time but giving it up doesn’t seem to have been that hard for him.

7. Dane is the kind of comedian that can shred hecklers.

He doesn’t hesitate if someone ever goes after him while he’s on stage, but when he does lay into them it becomes a kind of surgical dressing down that might end in the laughter of those around them and the heckler either leaving in embarrassment or being shamed to silence.

6. He’s had a few family issues in the past.

His brother actually stole money from him in the past and he lost his parents within 9 months of each other. So in all honesty Dane has gone through a few traumatic experiences in his life that had to have taken a toll.

5. During his earlier years Dane was kind of an emotional mess.

He had no idea what he wanted to do, he wasn’t the most popular guy around, and he just felt like an emotional wreck a lot of the time. Thankfully his mother helped to put him back on track since she always had faith in him. That’s very inspiring.

4. He auditioned for the role of Captain America.

Dane was supposed to keep this on the down low but unfortunately he let it slip that he was auditioning for the role and had to apologize to Marvel since they didn’t want anything getting out around the time they were auditioning. Obviously he didn’t get the part.

3. His estimated net worth is around $30 million.

This is a guy that has done show after show, been in several movies, and is one of the most noted comics in the world. Some people might not like his material all that much but they at least know about him and that seems to be enough. Dane has managed to sell out a lot of different venues when he’s been on tour and there’s no doubt he’s brought in a lot of money for various people.

2. He’s been accused of plagiarism.

When a comedian rips off another comedian’s act or material it’s just as bad as a writer doing it to another writer, especially since that’s how these folks make their living. A certain act is only good if it hasn’t been seen over and over but what’s difficult to prove is that it was actually stolen in the first place. So many people tend to think along the same lines when it comes comedy that there’s bound to be some overlap, though if a comedian does blatantly steal a joke or an act it’s expected that they stop immediately and remove it from their set.

1. Dane was set to star in a stage play but it was postponed.

He’s been in plenty of movies but isn’t really known for being a stage performer other than his comedy shows. The project didn’t get made however as it seems that there was an issue with funding at some point.

You either think he’s funny or you don’t, there isn’t a lot of middle ground with this guy.