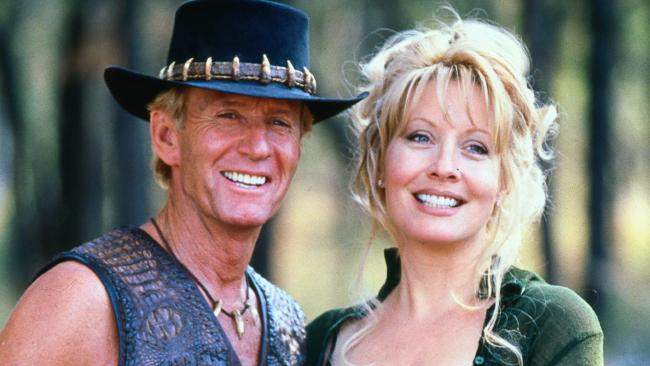 This is one of those cases in which you recognize the celebrity but don’t know where they’ve gone or what they’ve done for so long. Linda Kozlowski was at one time a very prominent actress on the big screen and Crocodile Dundee was a big part of that. Her role in the movie brought her a lot of fame and recognition since she was the love interest of the main character and a strong female lead at the same time. However her run in show business didn’t last nearly as long as some since she decided to be on her way not long into the 2000s for her own reasons and hasn’t been seen or heard from since, at least not that often to be honest. This leaves a lot of people wondering just what she’s been doing with herself and what prompted her to leave in the first place, since it seemed like she had a good thing going.

Here are a few things you might not have known about Linda.

10. She and costar Paul Hogan married in real life.

Their on screen romance sparked the real thing and once Paul had divorced his wife they were free to go about their way. It sounds as though Paul’s marriage before Linda hadn’t been going well and he’d been looking to start a new relationship, so this obviously worked out.

9. Linda trained as an opera singer at Juilliard.

She actually graduated from Juilliard in 1981 which is no small feat. Anyone that can accomplish this is someone you’d almost expect to go a pretty decent ways into the business and find their own path after a while.

8. She turned down a lot of roles after her time on Crocodile Dundee.

People were far too interested in typecasting her after this movie as she was given access to a lot of roles in which she would be the girlfriend to the lead character and this just didn’t appeal to her after a while. A person’s got to change things up now and again after all in an attempt to make something of their career.

She played the mother of one of the kids that were born after the mysterious blackout, and was attempting to get her son away from the group near the end of the film when Christopher Reeves’ character sacrificed himself. It wasn’t exactly a blockbuster, but it was a decent movie.

Linda had just had enough of the kind of jobs that no one seemed to care about but her. In fact it was starting to give her ulcers it got so bad so she decided that she’d had enough and wanted out. In all honesty you can’t really blame her for this.

5. Linda was nominated for a Golden Globe Award during her acting days.

She was in show business for two decades but when you consider that she was either forced to ride on someone else’s coattails or wasn’t given enough of a career to really make herself stand out any further than she did it’s not hard to see why she wouldn’t have more.

This likely has a lot to do with the big settlement that came from her divorce from Paul Hogan since he kept a lot of the Crocodile Dundee rights and she was given a one-time payment that was a handsome sum that likely kept her quite nicely for a while, and might still be doing just that.

3. She and Hogan divorced over a lack of shared interests.

For twenty-three years they stayed together. They had one son together and shared almost no interests. Everything with them was opposite apparently, from the food they ate to the music they listened to. It’s said that opposites attract and it’s still very true, but eventually it does get kind of worn out.

2. Linda was cast in a lot of movies that went straight to TV.

This among many things can wear an actor out when it comes to show business. A lot of TV movies seem to feature those that really don’t want to get into what they’re doing and therefore give a lack of effort that’s sadly noticeable. Linda has never tried to give any less than she can to make a project work, but she was tired of being one of the only ones that still cared enough to do this.

1. She and Paul are still very close.

Unlike some celebrity marriages theirs ended on a very amicable note as neither of them pays child support and they chose to co-parent their son. In fact Linda has admitted that she and Paul still spend time together now and again and are quite friendly with one another.

If only all marriages that end could remain that way.