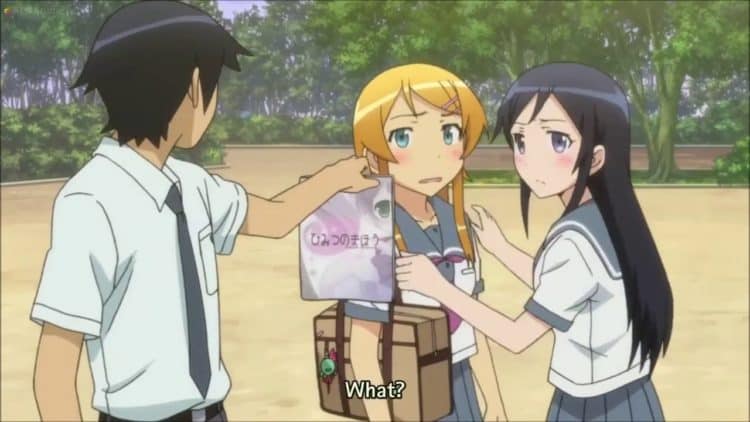 Oreimo is convenient shorthand for Ore no ImÅto ga Konna ni Kawaii Wake ga Nai, which translates to “My Little Sister Can’t Be This Cute.” Given the name, it is perhaps unsurprising to learn that it is a Japanese romantic comedy series that is centered on an incestuous brother-sister pairing, which is something that deters a lot of potential readers and viewers for very understandable reasons. Here are 10 things that you may or may not have known about Oreimo:

1. The Cover Has Inspired an Internet Meme

The cover of the first volume of the Oreimo light novels should be a familiar sight for a fair number of people who are otherwise unfamiliar with the series. This is because it inspired an Internet meme featuring characters from other series, with one standing in the forefront with a dissatisfied expression while the other is standing behind them with a skeptical expression. Generally speaking, these pictures are labelled with some kind of variation on the Oreimo series name that is more suitable for the nature of the relationship between the characters that are used.

Over the course of its existence, Oreimo has seen a lot of spinoffs. For example, there is a manga adaptation as well as an animated adaptation. Furthermore, there are drama CDs, radio shows, and video games.

It isn’t uncommon for light novels and their animated adaptations to have significant differences between them. The process of adapting stories to a new medium means that changes have to be made to accommodate differences between different mediums. However, these changes can sometimes change how characters are supposed to be perceived. Reportedly, this is the case in Oreimo.

4. The Protagonist Is Kyosuke Kosaka

The protagonist of the Oreimo series is named Kyosuke Kosaka. At the start of the series, he is a relatively normal high school student who has a strained relationship with his younger sister Kirino Kosaka.

5. Kyosuke Used to Be Much More of a Stand-Out

Kyosuke used to be much more of a stand-out in the best sense of the word. In short, he was a good student who was also a good athlete. On top of that, he was prone to helping others, though he tended to shoulder everything on his own as well. Eventually, Kyosuke was convinced by one of his friends that he didn’t have to go to such lengths following an accident, thus leading to the state at the start of the series.

6. Kirino Is an Otaku

It is revealed that Kirino used to idolize her older brother, which is why she finds the present Kyosuke to be more than a little bit disappointing. This explains why their relationship is so strained at the start of the series, particularly since there is the awkwardness of what she feels towards him as well.

8. Kyosuke Has Another Love Interest

Romcom light novels being romcom light novels, Kyosuke has another love interest, who is another otaku named Ruri Goko. Said character proved to be relatively popular, so it should come as no surprise to learn that the Oreimo fandom had particularly fierce shipping wars.

Chunibyo is when a child in their early teens who want to stand out so much that they delude themselves into believing that they have either secret powers or secret knowledge of some kind. It isn’t a formal condition, but it is something that pops up a lot in Japanese anime and related forms of Japanese entertainment. Ruri is a good example of someone with chunibyo, seeing as how she calls herself Kuroneko, wears red contact lenses, wears Gothic Lolita-style clothing, and claims that she has dark magic.

10. There Are Alternate Endings

Canonically, Kyosuke ends up in a relationship with Kirino after breaking up with Ruri. However, there is a Ruri-centered spin-off manga with an alternate ending in which he still breaks up with Ruri but eventually get back together later on, with the result that the two are happily married in the future.