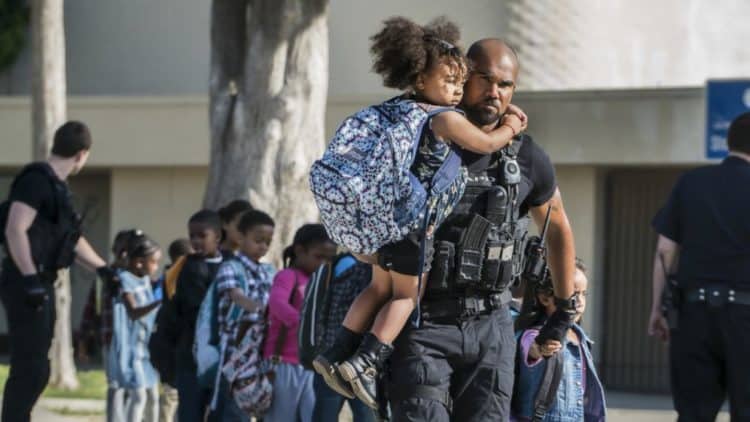 Shemar Moore is a guy that makes the women swoon since he’s built, his handsome, and he has a calm and collected manner in whatever role he’s playing that turns their legs to jelly since he acts like a sensitive and very caring man. To guys he’s someone to emulate as the effect he has on women is something that many want to emulate and a lot want to use as their own style in their own way. But in truth he doesn’t really care about the style all that much. Looking good is, to him, a great way to head out the door and to keep his image up, but affecting the kind of swagger that some men might go in for just isn’t his thing. Shemar’s whole idea of confidence is being polite to others, having faith in himself and remembering how to treat people in the manner that his mother taught him.

Here are a few other things you might not have known about Shemar.

10. He was voted off the Weakest Link.

It’s surprising to hear him being named the weakest of anything, but on the show there’s obviously more than just one thing that can get you voted off and so it’s not too hard to think that the challenges might weed people out depending on what’s needed to move on.

9. Shemar was at one time interested in becoming a professional baseball player.

He was pretty good too, but like a lot of people that move on from their favorite thing in life it had to do with an injury that he sustained while he was in college. He was pitching at 93 miles an hour when he came out of high school, which is impressive to be honest and worthy of taking a shot at becoming a pro.

8. Nobody was really expecting him to become an actor.

Acting was kind of a second choice for Shemar and even he didn’t have a lot of confidence going into it. But since his baseball career was more or less history he felt the need to do something that he had some interest in. It’s a good thing looking back on that decision now.

7. He’s the kind of guy that likes to work out.

Shemar isn’t what you would call a gym rat but he does like to go to the gym at least four days a week and does enjoy working out. It gives him a sense of having accomplished something during his day and it obviously keeps him fit.

6. For a while he kept his distance from romance to focus on his career.

He’s had plenty of female friends but he realizes that a lot of women don’t like to come second to anything and he didn’t want anyone to think that he was doing such a thing so he kept his focus on his career and planned to find the “Bonnie” to his “Clyde”, meaning he wanted someone that he could give his undivided attention to and make her feel that she was the only thing in his life.

5. Shemar likes to point out that he’s just as human as anyone else.

He likes to stay dedicated to his career but he’s also the type that likes to kick back and just gain a few pounds while he sits on the couch every now and again too. This is always pleasing to hear since it’s easier to relate to the stars in this manner.

4. After working on TV for so many years he’s been ready to move on to movies.

Shemar has been on TV for a while now and finally making the move to movies was something that he was more than ready for since it gave him a different platform from which to work and a chance to expand his career.

3. He doesn’t see himself as a black actor, just as an actor.

Since his father is Caucasian and his mother is black he’s half and half, but he’s never seen himself this way since his mother never raised him in one way or the other. She simply raised him to be a good man and be kind as he could to others. That’s what a parent is supposed to do after all, among other things.

Shemar can get in the mix with other celebrities and be as friendly and engaging as anyone else, but deep down he’s still kind of a shy person and will gladly take his own personal time when he wants it. There’s nothing wrong with that, after all everyone needs a little private time now and again.

1. Shemar credits his mother for a lot of things in his life.

Whether he calls himself a mamma’s boy or not is up to him, but the way he talks about his mom you can understand that he has a lot of appreciation and love for her and that’s something that doesn’t get said often enough.

He might seem like Mr. GQ Smooth, but Shemar is definitely a nice guy that was raised right.