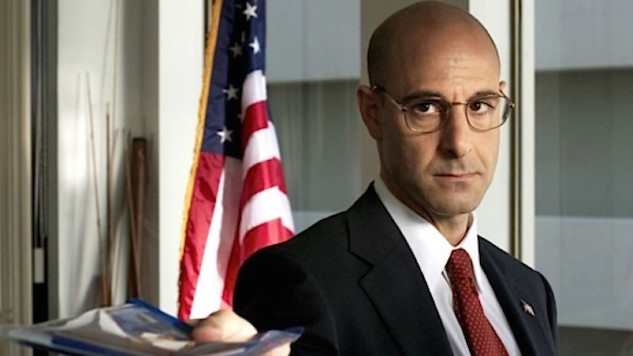 Stanley Tucci is a very memorable person but a lot of people would be hard-pressed to remember his name since he’s not an action star, a romantic character, or even someone that makes the billing all the time. He’s one of those individuals that enters a movie and creates a character that’s either despised or greatly appreciated as his intellect allows him to rise above many individuals and become someone that is highly knowledgeable but not always approachable. In this manner he can move up and down the spectrum of good and bad and alternate between the two occasionally in films as he did in The Core. More often than not though he’ll stick to one side or the other as the script demands and play the role to the utmost of his ability as he seeks to bring his characters to life.

10. He was Ving Rhames’ roommate at one time.

This was when they were both back in S.U.N.Y. Purchase and Ving was still going by his given name, Irving. It’s widely believed that Stanley is the one that started called him Ving and the name just stuck after a while.

It’s hard to say whether Meryl has a lot of close friends or just a bunch of people that want to be her friends since she’s such an influential person in show business. But it can be said however that she and Stanley are on very friendly terms as they’ve known one another for a while.

8. He reconciled with his ex-wife when it was discovered that she had breast cancer.

They had separated before her condition became known but once she was diagnosed they decided to get back together and he stayed with her up until she passed on. Too many people might say he had other motives for this but the best explanation is that he has a big heart and didn’t want her to go through this alone. That’s the kind of supportive person that you can be proud of.

7. Stanley has felt comfortable on stage since he was a kid.

He firmly believes that you hit a certain age and decide what you want to do with your life no matter what it might be. That age tends to differ for everyone but it’s important to pay attention when that time comes along it would seem since you don’t want to miss your moment.

6. A lot of his roles seem to place him in a position of authority.

In many movies he’s managed to use his intellect to flesh out a role and make himself seem uniquely important. In several movies he’s appeared to be the smartest person in the room and has proven it more than once as he’s usually one of those that knows a lot about a lot.

Ever since he and Felicity Blunt, Emily’s sister, got together they’ve been family and it would seem that things have been going great ever since. He and Felicity met at John Krasinski and Emily Blunt’s wedding and just kind of hit it off.

4. Stanley has played the part of Stanley Kubrick in one movie.

This seems like it would have been something to see as well as something kind of difficult to do since Kubrick wasn’t always the easiest person in the world to get along with, and getting that kind of attitude down might have taken some doing. But if anyone can play an intelligent and rather condescending person it would be Stanley, as he’s done it more than once in his career.

3. At one time he was the co-owner of a tavern in New York.

Unfortunately it was sold a while back, but it seems like it might be interesting to be co-owner of a business if only because it would mean that one was in charge of something other than their own existence and could make a real difference when it comes to their small slice of the economy.

2. He’s taken on the role of director as well.

Stanley has taken the time to sit behind the camera as well and seemed to enjoy it while he was there. It wouldn’t be too much of a surprise to see him take a more directorial role in the coming years once he’s managed to decide if he wants to keep acting or step behind the scenes to guide things along instead.

1. The biggest audience he’s ever seen came when he starred in The Hunger Games.

He’s seen a good number of fans throughout the years but something about The Hunger Games really sparked an interest in him that people couldn’t fully explain but jumped on all the same.

Stanley is one of the better actors in show business at this time, and when he shows up you simply know that his part is going to be something interesting.