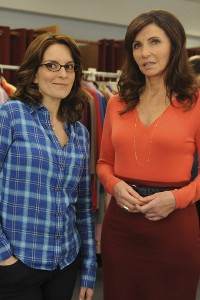 30 Rock season 6 stages the fourteenth episode of season 6 with “Kidnapped by Danger,” where Liz prevents Jack from succumbing to Avery’s mother Diana (Mary Steenburgen) during production of his movie while Kenneth takes on a new job and Tracy and Jenna out-parody Weird Al Yankovic. Somewhat less even than the previous half-hour, “Kidnapped by Danger” seems like a promising story that doesn’t quite live up to its potential.

So, I was more or less correct when I decided that it wasn’t necessary to view ‘Grandmentor‘and ‘Kidnapped by Danger’as a single episode, in spite of their presentation. Kristen Schaal has no role to play this week, and the only real continued threads are the production of Jack’s Avery Jessup movie and Kenneth once again attempting to claw his way back up the corporate ladder, but they’re not really continued in any way that’s thematically dependent on ‘Grandmentor.’If anything, I would think that the two actually work better separated by a week, given a little time to let the idea of Kenneth settling into a lower job or production ramping up on ‘Kidnapped by Danger’simmer a little.

The threads ‘Kidnapped by Danger’does pick up end up in fairly satisfying through-lines though, as production of Jack’s film makes for a lot of great gags and meta humor, even if the final product is somewhat confusingly hilarious. For instance, I’m in shock that 30 Rock has never attempted the Baldwin brother humor before, given its longevity. Using William Baldwin as Jack Donaghy stand-in Lance Drake Mandrell makes for an inspired turn in playing to both similarities and contrasts of the two Baldwins, and I certainly hope we can see that character again. The gags of using Cynthia Nixon with a Boston accent and viewing the events of the last few seasons through Liz Lemon’s writing also made for some solid meta-laughs, but given the turmoil of the episode, I wasn’t sure what the final exaggerated ‘Korean Freeze Ray!’cut of the film was supposed to be a satire of, whose writing style was being mocked.

Much of Jack’s arc through ‘Kidnapped by Danger’is to be confronted once more by Avery’s mother Diana, where the sexual tension between the pair drive’s Jack’s sense of guilt and denial over his current predicament. As much as I like the continued attention to the thread and the introspection Baldwin lends to the part, I’m not sure I appreciate the doubt cast on the state of Jack’s relationship with Avery prior to her kidnapping. And as for Jack creepily finding himself attracted to Diana, the issue was put to bed enough in ‘Hey Baby, What’s Wrong?‘that reprising it felt like a diversionary gesture, somewhat hand-waved away by pawning Diana’s affection off on the nearest Jack facsimile. It was worth a few good gags, but ultimately didn’t add much to the story we didn’t already explore. 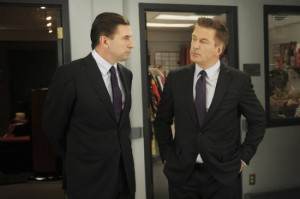 Similarly, I’m growing increasingly wary of Kenneth’s arc this season, as it seems to circle those inevitable waters of familiarity, placing the character back toward his page gig. I quite like that the character has clear aspirations of being ‘President of Television,’but seeing Kenneth in one new position or another has been so incredibly refreshing, it would feel horribly tarnished if no actual growth was achieved or lesson learned. That said, I have to give special credit to his disturbing revelation to Jack that he lies to himself day after day in order to be upbeat, especially dark for 30 Rock, but just twisted enough to feel original. I’m not sure at this point I could ask for the show to cut to any real emotional core of Kenneth, but tonight’s turn felt like a staunch declaration of honesty in an otherwise re-hashed plot. For that, ill give it a temporary pass.

At first it seemed like 30 Rock was back to old hat for Jenna, vainly pairing her with Tracy once more, but adding a parody competition with Weird Al Yankovic was certainly an interesting, if tangential twist. I’m not sure how the writing or production shaped up for ‘Kidnapped by Danger,’but I have to imagine Yankovic’s appearance would have been far more effective had he actually been introduced into the show, rather than a series of cutaway gags. Weird Al feels like a perfect fit for 30 Rock, yet here was limited to an external narrative

Ultimately ‘Kidnapped By Danger’didn’t prove to be as effective as ‘Grandmentor’but still had plenty of laughs in its own right. At most, it simply could have used a bit more time to flesh out its writing and production, perhaps better relegated with another episode in between tonight’s pairing.