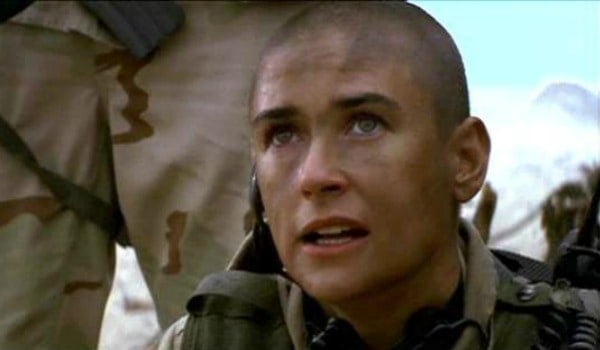 In the past couple decades it’s been seen that women are coming out in a big way. They’ve been doing their very best to prove that they can accomplish anything men can and they’ve been taking many fields by storm. One such field is the role of the female soldier in movies. This trend was long overdue and has been creating a stir for a while now that is actually heartening to see. Women deserve a lot more respect than they get at times and have proven that they can be every bit as tough as men, if not tougher. The struggle to include women in a “man’s world” so to speak has not been a smooth road to this point, but it’s yielded a lot of results as women have rightfully fought for what they’ve earned and are still fighting to this day.

Here are just a few of the toughest female soldiers in movies.

Wade is being groomed by the US Navy as one of their top, elite pilots and as a result she is one of the baddest women on the planet. She can fly, she can fight, and she mow suckers down when they’re chasing after her as she’s trying to escape hostile territory. Granted, she had a lot of help at the end, but she’d almost made it to border without any outside help.

Dizzy is just a straight up firecracker. She doesn’t take guff from anyone, not even the hard-nosed DI that has no trouble breaking limbs or choking out his fresh recruits. That attitude earns her a great deal of respect from everyone but Rico until he finally comes to appreciate Dizzy for who she really is. Too bad it came so late in the movie, these two would have been perfect for each other.

There’s something about Rain that says just don’t mess with her. She’s tough, she’s sarcastic, and more than that, she just doesn’t quit. Unfortunately near the end she does turn into one of the undead, but even then she cracks her neck and THEN goes after Alice. I mean come on, that’s just one tough woman no matter if she’s alive or not. She’s the last one on this list I’d mouth off to.

Peggy Carter is tough, but she does it in such a classic, dignified manner that you might think she’s a lot weaker than she is. When she puts a soldier on his back with the greatest of ease though it kind of makes everyone around her perk up and pay attention. She might look like a filing clerk or a non-combatant, but she hits like a seasoned soldier.

The rest of the women on this list might have been put through the ringer during their training but the difference here is that we get to see it with Jordan. She’s given the roughest treatment, she’s put through hell, and then she’s almost mock-raped in front of her fellow soldiers. And despite all that she fights back and makes sure the master chief knows that she’s for real. And what’s his response? Acceptance, rightfully earned.

So it goes without saying, these female soldiers are just flat out tough.